The Church of Scientology, which has been buying and refurbishing historic buildings around the world, plans to open later this summer its first LEED-certified center.

The Pasadena church is a renovation of a turn-of-the-century bicycle factory, retaining the original structure's four-story atrium and facade while building in modern features and energy efficiency.

The Pasadena facility is part of a larger program launched in 2004 by the Church of Scientology to expand its facilities around the world. Of the 19 new churches opened since 2004, eight of them have been in unique historical buildings. From a press release announcing the Pasadena church:

In May the Nashville, Tennessee Church of Scientology historic building took top honors in the city's 35th Annual Preservation Awards for meeting all safety standards while preserving the beauty and grace of the 1898 building, which opened last year. Built just two years after the famous Grand Ole Opry in a similar style, its features include red brick walls, original doors and hardwood floors, 14-foot ceilings and an unusual three-floor atrium crowned with a glass cupola.

Last January, the Church opened the Belgium branch of the Churches of Scientology of Europe, an 88,000 square-foot early 20th century historic structure in the heart of Brussels (pictured below). In October 2009, the Founding Church of Scientology in Washington, DC completed renovation of its seven-story, 49,000-square-foot historic building by architect Appleton P. Clark, Jr., half a mile from the White House. And another historic Church property fully restored in 2009 is the 1926 Mediterranean Revival-style Fort Harrison building in Clearwater, Florida. 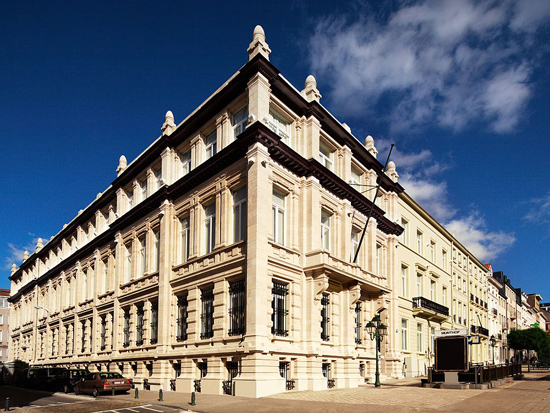 Other cities where the church is planning historic renovations include Detroit, Chicago, Boston, Montreal and Manchester, England.

Scientology's interest in green building is far from unique: In recent months there have been similar announcements from a number of faiths. In April, a Benedictine monastery in Wisconsin and a Mormon meeting house in Utah earned LEED certification for green building practices, while last fall the U.S. Environmental protection agency published an Energy Star toolkit for houses of worship, aimed at improving the energy efficiency of the more than 370,000 religious facilities in the U.S. And as far back as 2005, Eric Corey Freed offered a rundown of the greenest churches in the land.