Sainsbury's Creates a Buzz with New Network of 'Bee Hotels'

Sainsbury's Creates a Buzz with New Network of 'Bee Hotels'

As part of its corporate responsibility program, Sainsbury's will set up a network of bee hotels across London in a bid to boost the region's ailing population of solitary bees.

Bees provide a critical role in the pollination of most fruits and vegetables in the U.K., according to Sainsbury's. The retailer announced Friday it has hired the sector's first bee keeper to establish the 38 bee habitats, to be located at London-area stores.

The company previously tested eight bee hotels at a new eco-store in Dursley, Gloucestershire, one of the U.K.'s main fruit and vegetable growing areas.

"Bees are the unsung hero of the food chain, as most fresh fruit and veg depends on bees for pollination," Robin Dean, Sainsbury's newly hired bee expert, said in a statement. "We hope that by setting these bee hotels up at a network of stores across the city, we'll be able to help rejuvenate the bee population, and learn more about why the population has decreased so dramatically over the past few years." 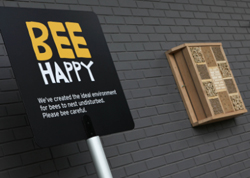 Since the bees are solitary bees, not honey bees, they rarely sting because they don't store honey, according to the British Beekeepers Association. Some of their species are doing well, while others have declined over the past three decades, the Royal Horticultural Society said, largely due to loss of habitat, such as wildflowers. Solitary bees are more efficient than honeybees for pollination.

Once the bee hotels are up and running, Sainsbury's will hire a grad student to maintain the hotels and send the results to various EU research programs.

Previous efforts by Sainsbury's to bolster the bee population include its 2005 project with agricultural suppliers to sow a special seed mix in farmland areas that contains crucial pollen and nectar. The seed mix has been sown across more than 500 acres.

Sainsbury's to Enhance Eco-Store Experience with Swarms of Bees