A new rule from the Federal Trade Commission aims to make it easier for consumers to compare types of bulbs by making lumens, not watts, the most prominent figure on packaging.

Starting in the middle of next year, labels on the front of light bulb packaging must emphasize the bulb brightness measured in lumens as opposed to emphasizing watts, which is a measurement of energy use.

Until incandescent bulbs are phased out in the U.S. in 2012, consumers have the choice of incandescent, compact fluorescent (CFL) and light emitting diode (LED) bulbs. Since CFLs and LEDs consume less energy, they use fewer watts, and most CFL and LED packaging also lists how many watts a comparable incandescent would use. 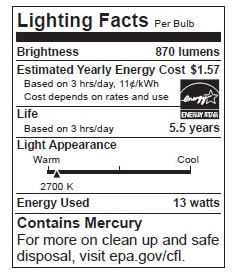 Under the new rule, all bulb packaging would be streamlined so all focus on lumens on the front of packaging and list other information on the back of the packaging in a new Lighting Facts box similar to the Nutritional Facts boxes on food.

The Lighting Facts will include brightness, estimated yearly energy cost, bulb life expectancy, light appearance (from warm to cool) and if the bulb contains mercury. The bulbs themselves will be imprinted with their brightness and a disclosure if they contain mercury.

LEDs, the most costly of all bulbs, last much longer than both incandescents and CFLs, and do not contain mercury. A number of companies have released or plan to put out LEDs, and research estimates that LEDs will make up half of the $4.4 billion market for lamps in the commercial, industrial and outdoor stationary sectors by 2020.

4 Tips on Buying CFLs for Your Business