Ford Expands Soy Foam Use, with an Eye on Compostables

Ford Expands Soy Foam Use, with an Eye on Compostables

Weeding out petroleum-based materials in favor of bio-based alternatives has helped Ford reduce the environmental impacts of its vehicles.

Using foam derived from soy rather than petroleum, for example, has avoided more than six million pounds (2,721 metric tons) of carbon dioxide emissions annually. The company said last week it would expand the use of bio-based foams through nearly all of its vehicle lineup this year -- with an eye on the possibilities of one day using compostable plastics.

"Soy foam is just the tip of the iceberg in the development of vehicle materials from natural resources," Debbie Mielewski, Ford's polymer technical leader, said in a statement. "We have to entertain the thought of bio-replacement in baby steps, looking at every aspect of a car that could be green. One day I hope to see the automotive world go totally compostable, removing the use of petroleum-based parts 100 percent."

That day isn't quite on the horizon, but could eventually become a reality, Mielewski said in a subsequent interview with HybridCars.com. 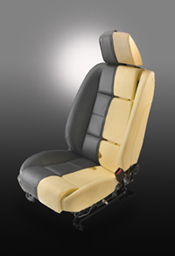 "The compostable plastics, while not currently meeting our requirements for performance or durability, hold promise for the future," Mielewsli told HybridCars.com. "If we can 'grow' the materials for our cars and then put them back into the soil at the end-of-life as a nutrient to grow more plants, I think that would be a major accomplishment."

The company has a long history of experimenting with alternative materials, ranging from trying to make materials lighter to making plastic from both wheat waste and soy oil.

The potential benefits are compostable plastics are many: reducing the need for foreign oil, boosting the farming community, and reducing emissions and impacts.

"It’s just going to take some time, and some growing pains, to get there," she said.

The waste reducion opportunities from shifting to compostable materials in autmobiles are also immense, considering that a typical vehicle is made with roughly 300 pounds of plastic, a fraction of which is recycled.

"We have and are continuing to work diligently on each of these issues in our laboratory to make sure we have the highest quality end product."

One for the road: Ford and McDonald's to turn coffee waste into car parts

Ford, Jose Cuervo and the future of waste-based materials