The 4,000 cows at the Ukrainian Milk Company Ltd. near Kiev are doing more than producing dairy products. Their dung is being used to produce energy at the country's first biogas cogeneration plant.

The facility, which just completed its ninth month of operation, also is the first in the country to deploy a General Electric Jenbacher gas engine specially designed for cogeneration.

The combined heat and power plant uses a GE JMC 312 containerized cogeneration model gas engine. Through its operation, the facility substitutes the equivalent of 1.2 million cubic meters of natural gas a year, resulting in the reduction of an estimated equivalent of 18,000 metric tons in CO2 emissions, according to GE.

The cow manure helps produce 625 kW of electricity and 686 kW of thermal output. Energy not used by the plant is sold to the power grid under Ukraine's green tariff. The measure is designed to stimulate production of clean energy by providing a framework for licensed alternative energy producers, such as the Ukrainian Milk Company, to sell their power at a special price.

ZORG, a biogas plant construction company based in Switzerland, and SINAPSE, the engineering company that is GE's distributor and service provider in Ukraine, were project partners in the building, commissioning and startup of the plant, which occurred during one the country's worst winters in recent memory. Bone-chilling temperatures hit 20-year lows ranging from -25°C to -30°C. Igor Aksyutov, the commercial director of ZORG Ukraine, praised the team for its efforts to get the facility running satisfactorily despite the weather.

In May, GE and the operators of the new Liaoning Huishan Cow Farm announced plans to launch the world's largest biogas project using cow manure. Scheduled to start operations in September, the facility will use the manure from a quarter of a mlllion cows to power four GE Jenbacher biogas engines and produce an estimated 38,000 MWh a year.

Here is a roundup of other GE biogas projects: 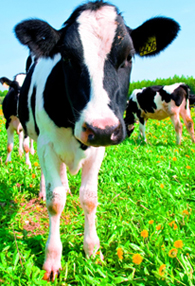 In Punjab, India, a GE 1-MW Jenbacher biogas cogeneration system has supported a waste-to-energy conversion plant at the Haebowal dairy complex since late 2004. The complex in northwestern India serves1,490 dairies, which have 150,000 head of cattle that produce 2,500 tons of manure daily. The biogas created from the anaerobic digestion of 235 tons of cow manure each day generates electricity as well as thermal power.

In China's Yan Qing District at the Beijing Deqingyuan Chicken Farm Waste Utilization plant, 30 miles north of the capital, the waste of 3 million chickens produces the biogas that powers GE Jenbacher gas engines that generate 4,600 MWh of electricity a year.

In the U.S., the Crave Brothers Farm, LLC, of Waterloo, Wisc., use a Jenbacher biogas engine in a cogeneration project that produces 633 kilowatts of renewable energy. The farm sells the surplus power to the regional grid.

Images of cows and the Ukrainian Milk Company biogas project courtesy of GE and ZORG.