Eighteen U.S. colleges and universities made The Princeton Review's 2011 Green Rating Honor Roll for maintaining the most sustainable practices, policies and course offerings among all campuses rated for their environmental friendliness, said the company that created the popular "best colleges" guides.

The Princeton Review issued its third annual green honor roll along with its green ratings for colleges yesterday. Guides containing school profiles with the green scores go on sale today and next week.

This year 703 schools, the most thus far, submitted environmental information that was scored on a scale of 60, the least possible score, to 99, the highest possible score. The schools on the honor roll received scores of 99.

Here is a list of the honorees (details of some of their environmental elements are on the last page):

"The heartening thing is the number of the schools that are participating," said David Soto, director of college ratings for The Princeton Review.

In 2008, when The Princeton Review began its green rating and honor roll program, more than 500 colleges and universities submitted information for profiles that appeared in the company's 2009 edition. Eleven schools were named to the honor roll, Soto said.

In 2009, the number of green-rated schools grew to more than 600 and 15 made the honor roll. Eight of them made the list again this year: Arizona State University, the College of the Atlantic, the Evergreen State College, Georgia Tech, Harvard, Northeastern, UC Berkeley and Yale.

The Princeton Review developed its green rating program with help from EcoAmerica in response to interest from students about college practices on sustainability issues. In 2008, The Review's annual hopes and worries survey showed that 63 percent of college applicants and their parents said they would value information about colleges' environmental commitments and that data could affect their choices of schools.

Last year, 67 percent of survey respondents said environmental information could sway college choices, and this year 64 percent said the same. Soto attributed the dip in the survey response to continuing worries about the economy taking precedence over other considerations. Despite it, the interest and support for the green rating program remains strong, he said.

"We're very pleased that students and schools alike see the value of green ratings," said Meighan Speiser, marketing vice president at EcoAmerica. They continue to be very relevant." The growing number of schools in the green ratings program and the number of Review publications containing them attest to the demand for the data, she said.

Green ratings of participating schools are included in the 2011 editions of The Princeton Review's "The Best 373 Colleges" and "Complete Book of Colleges," which were both available for sale as of today, and "The Best Northeastern Colleges," which goes on sale August 10.

Earlier this year, The Princeton Review and the U.S. Green Building Council released a free online guide of the greenest 286 colleges and universities in the United States. The guide, released to mark the 40th anniversary of Earth Day, included only the schools that attained scores in the 80th percentile or better among the pool of 697 that received green ratings in 2009.

In the three years of the program, students have become increasingly involved in the decisions colleges and universities make about their sustainability practices, policy and educational programs. "Students are becoming stakeholders in what's happening and they are really taking the initiative," Soto said.

"They're taking a place at the table with administration to make decisions not only in the meetings but also in terms of voting with their  pocketbooks," he said, referring to students at The Evergreen State College who signaled their support for green power by assessing themselves a fee earmarked for the campus's renewable energy purchases.

The 2011 Green Rating Honor Roll with excerpts from The Princeton Review's listings:

Arizona State University, Tempe -- The campus has more solar panels than any other single U.S. university campus. The university's School of Sustainability, established in 2007, was the first of its kind in the country.

College of the Atlantic, Bar Harbor, Maine -- Recycling bins can be found in each office, composting bins in every kitchen and composting toilets in all new buildings at the college.

Georgia Institute of Technology, Atlanta -- Georgia Tech has 21 endowed chairs and more than 100 classes that include sustainability components. The school also requires all vendors to provide green products.

Harvard College, Cambridge, Mass. -- Sixty-two building projects are in the pipeline for LEED green building certification. The campus aims  to reduce emissions 30 percent below a 2006 baseline by 2016.

Northland College, Ashland, Wisc. -- The college has two wind towers, a solar power system and geothermal heat in the campus center and library. The college includes a building constructed by students that is completely off the grid.

State University of New York - Binghamton University -- The school stages an energy conservation contest and recycles or composts more than 90 percent of its service ware.

University of California, Berkeley -- Has committed to reducing its greenhouse gas emissions to 1990 levels by 2014, six years earlier than the state's target. The campus's main food service operator was the first in the U.S. to receive organic certification. The university has more than 80 academic degrees, 90 research centers and 25 student-run organizations with an environmental focus.

University of California, Santa Barbara -- With six LEED-certified buildings, the campus has the most green rated structures in the UC system. It has a goal of reducing emissions to 1990 levels by 2020 and becoming carbon neutral by 2050.

University of California, Santa Cruz -- The university has a 70 percent waste diversion rate, and 20 percent of its energy comes from renewable sources. Its many honors for sustainability include a spot on the Sierra Club's Coolest Schools list.

University of Georgia, Athens -- The university maintains aggressive programs to reduce energy and water use. An "Every Drop Counts" campaign cut water consumption 30 percent. UGA also established an Academy of the Environment to promote cross-disciplinary collaboration in research, graduate and undergraduate training.

University of Maine, Orono -- Aims to become carbon neutral by 2040. The university recycles more than 500 tons of paper products annually and provides free bikes to students, faculty and visitors.

University of Maryland, College Park -- The campus's efforts include conducting a green job fair and establishing a University Sustainability Council. The university won a contest to register individuals' carbon footprints and earned the "America's Greenest Campus" title from Climate Culture.

Warren Wilson College, Asheville, NC -- Environmental leadership is stressed at the school, which began its recycling program in the 1980s. A LEED-Platinum EcoDorm built by student teams is the most prominent showcase of the college's efforts.

West Virginia University, Morgantown -- A national leader in energy research, 100 faculty members completed $98 million worth of research in the area in the past four years. 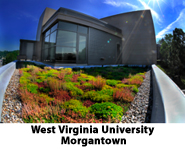 The Princeton Review provides rankings of colleges and universities on the basis of scores in several ratings categories. The green rating is one of them, and schools are not ranked by their scores in that category alone. An interactive list of the honor roll schools and more information on The Princeton Review's green rating program are available at www.princetonreview.com/green.

Top image, the LEED-Silver certified Global Institute of Sustainability Building at the Arizona State University, Tempe, courtesy of the university. Other images courtesy of The Princeton Review.