Recycling glass used to be challenge in Kansas City, but a non-profit, brewery and insulation maker have turned that around with Ripple Glass, a company that has its sights set on doubling the city's glass recycling rate.

What started as a citywide effort to get more residents to recycle is evolving to work more directly with bars and restaurants while upgrades are made at Ripple's glass processing facility that will let the local Boulevard Brewing Co. turn its discarded beer bottles back into new bottles.

The seed for Ripple's creation was planted when non-profit Bridging the Gap had a grant from the U.S. Environmental Protection Agency to work with local businesses on sustainability issues. Two of the businesses involved were Boulevard and Owens Corning, which had discussed using crushed beer bottles to make fiberglass insulation, but were hampered by the lack of glass hauling in the city.

"We've long been cognizant of the fact that those bottles are basically going on a one-way trip," said Jeff Krum, Boulevard's CFO and a Ripple co-founder. "The idea that they'd be used once and then contribute to filling up a landfill, and thus wasting the embedded energy in them, was disheartening to us."

At the time, Kansas City's glass recycling rate was under five percent (the national rate is 28 percent) and the city only had a handfull of recycling drop-off points where glass was accepted. "Pre-existing drop-off settings were in highly industrial areas, places that were out of the way and hard to get to," said Stacia Stelk, Ripple's executive director, who also worked for Bridging the Gap.

When waste hauler Deffenbaugh Industries opened a new recycling facility in the early 2000s, it decided not to include glass, Stelk said. So any glass that was brought in from Bridging the Gap's collection sites was trucked out of town to be processed. 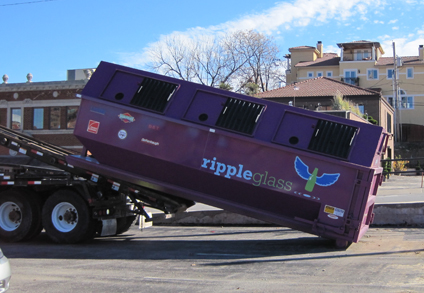 To build up a new recycling stream basically from scratch, Ripple Glass was created in late 2009, placed more than 70 large collection bins around Kansas City and turned an existing building into a glass processing facility.

"The first thing was making the locations easily identified, conventiently located, and we tried really hard to make sure our bins didn't look like anyone's trash dumpsters," Stelk said. After struggling with finding businesses and other places with the space to host the first 25 of Ripple's big, purple bins, once they launched, Ripple received so many calls from companies wanting bins on their premeses that it ended up with a waiting list of over 70 locations.

Six months later, Ripple has more than doubled the amount of glass it brought it, from about 400 tons a month to over 1,100 tons and growing. Originally planning to bring in 6,500 tons in its first year, Ripple is now looking to bring in close to twice that amount, which would double the city's recycling rate. Grocery and liquor stores, as one might expect, bring in the most glass, and the bins have been promoted through an insert in Boulevard's packaging, local press coverage and advertising on coasters in bars.

Deffenbaugh trucks the glass over to the processing plant, where it is crushed up and then sold to Owens Corning, which has a five-year contact with Ripple. Over the last few years, Owens Corning, Ripple's sole customer for now, has brought the recycled content of its fiberglass insulation up to 50 percent.

Ripple's glass recycling system is now expanding in two ways that will sync up. First, it's placing smaller collection bins behind about 100 bars and restaurants in the city's downtown to make it easier for the businesses that produce the most glass waste to recycle it. Ripple is also adding optical sorting technology to its processing plant so that glass can be separated by color. That will allow amber bottles to be kept separate and then sent to a bottle maker in Oklahoma that supplies Boulevard. It's also makeing upgrades so it can double its capacity by the end of the year and is taking glass from other nearby cities.

Last year, Boulevard sold 10 million bottles of beer. "For the past several years, 85 percent of those bottles ended up in landfills," Stelk said. In the months before Ripple's facility opened, Krum said, Boulevard started stockpiling any waste glass it ended up with.

Boulevard and other individuals and companies invested about $5 million in Ripple to get it up and running last year, and the EPA grant helped fund some of the collection bins. Aside from Krum, the other two managing principles of Ripple are also affiliated with Boulevard.

By filling the glass recycling void in Kansas City, Ripple has created a new life cycle for glass in the area: Collect glass locally, crush it up locally, sell it to a local manufacturer and, soon, turn it back into bottles to be sold locally.

Piecing together the shattered economics of glass recycling