Energy expended for lighting has plummeted at the headquarters of broadline distributor Maines Paper & Food Service following a retrofit with an advanced system from Digital Lumens.

Maines is a privately held $3 billion company that provides food, equipment and serviceware to prepare and present it, and products to clean it up. In addition to restaurants, Maines' clients range from convenience stores to country clubs and include institutions such as healthcare facilities and schools.

The firm converted the lighting in its 460,000-square-foot headquarters in Conklin to a Digital Lumens Intelligent Lighting System about 60 days ago and is already realizing hefty savings, said Digital Lumens President and CEO Tom Pincince. 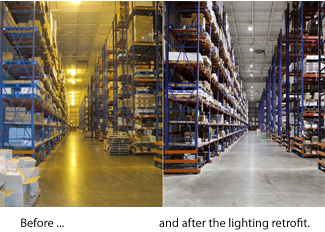 The two companies today announced the installation of the system that is expected to deliver savings of 1,726,108 kWh per year and avoid 1,240 metrics tons of CO2 over the course of a year.

The technology developed by Digital Lumens weds LEDs, networking and software into a single, integrated system.

At the heart of the company’s Intelligent Lighting System, hailed as a game-changer when it was introduced to the market this past March, is an intelligent lighting engine (pictured below right), which is an LED-based luminaire with three light bars that can be aimed and has, in effect, an onboard computer with an integrated occupancy sensor, a kWh odometer and wireless mesh networking capabilities.

The units form a smart light grid and can be controlled systemwide as well as by individual fixture: They respond to variables -- such as "messages" about occupancy, available daylight and need for mutual support -- in the area in which they are mounted and to parameters set by the business -- such as different light levels for various times of day and zone-specific lighting that’s pegged to the activities and functions of each sector.

More than 85 percent of the facility is warehouse space and about half of that  is cold space, Pincince said. Maines needed a system flexible enough to serve areas with various lighting needs and function in temperatures ranging from just below room temperature to negative 20 degrees.

The Digital Lumens’ system is unaffected by the cold, doesn’t give off much heat and doesn’t consume a lot of energy, so it’s not working hard to do its job, Pincince said. It also is easy to install. The Maines retrofit, he said, “took about a week and we were able to do it while the facility was up and running.”

“Lighting represents about 20 percent of our warehouse electricity costs, and a great opportunity to reduce our facilities’ costs and improve operational efficiency,” said Pat DeOrdio, Maines’ vice president of operations, who added that the new lighting system “enables us to significantly reduce our energy consumption, improve overall safety by increasing light levels and decrease maintenance.”

“But the industrial sector is pretty interesting, our retrofit at the Conklin facility is the equivalent of retrofitting every home in Conklin [population 5,750],” Pincince said. “The impact of a retrofit like this is radical.”

The payback period for the system is about year, according to Pincince, and the retrofit project qualifies for financial incentives from the New York State Energy Research and Development Authority, better known as NYSERDA.