A team working on lithium-ion battery technologies that can be poured into any shape or woven into fabrics reported progress on their work at the American Chemical Society's National Meeting this week.

Mark Allen, a Ph.D. in Angela Belcher's research group at MIT, presented a report showing that the group has begun developing new materials for a battery's positive electrone, using a common -- but non-harmful -- virus called M13 bacteriophage to develop the battery rather than harmful chemicals.

"Using M13 bacteriophage as a template is an example of green chemistry, an environmentally friendly method of producing the battery," Allen said in a statement. "It enables the processing of all materials at room temperature and in water." And these materials, he said, should be less dangerous than those used in current lithium-ion batteries because they produce less heat, which reduces flammability risks.

The end goal of the project is to create lightweight, long-lasting and rechargeable batteries that can be woven into fabrics, poured into any shape, or sprayed on any containers. Among the first projected uses for the batteries, as part of the testing phase, is to power unmanned aerial surveillance drones. 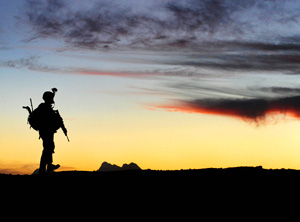 But other uses -- military and otherwise -- include the development of "rechargeable clothing" that can lighten the load of overburdened soldiers and power the high-tech military and civilian populations of the future.

"Typical soldiers have to carry several pounds of batteries. But if you could turn their clothing into a battery pack, they could drop a lot of weight," Allen said. "The same could be true for frequent business travellers -- the road warriors -- who lug around batteries and separate rechargers for laptop computers, cell phones, and other devices. They could shed some weight."

The U.S. military is pioneering the future of battery technology, as it has with any number of technologies in the past, perhaps most notably the internet. In 2009, the Department of Defense enlisted GE to create a smart grid on the Twentynine Palms military base in the California desert.

Photos CC-licensed by The U.S. Army.