Cleaning products maker Ecover will start adding sugar cane-based plastic to its packaging next year. The company is using a form of high-density polyethylene (HDPE, identified by resin code #2) made by Brazil-based Braskem SA, which is also supplying Procter & Gamble with bioplastic for some products in its Pantene Pro-V, Covergirl and Max Factor brands. Ecover's liquid products will come in packaging made with at least 30 percent sugar cane-based plastic starting next January.

Method has launched its first line of antibacterial cleaners by working with CleanWell, the maker of a thyme-based disinfectant that kills 99.99 percent of bacteria. The Method Antibac line includes a bathroom spray, kitchen spray and all-purpose wipes.

A bill aimed at banning bisphenol A (BPA) in kid's bottles in California failed a state Senate vote by three votes, but it could be back up for another vote within a week. SB 797 previously was passed by the Senate and Assembly, but must be re-voted on by the Senate before it can go before Gov. Arnold Schwarzenegger. The bill, which would ban BPA in cups, bottles and food packaging for kids under age 3, is similar to other BPA bans that have been enacted in Chicago, Minnesota, New York, Canada, France, Denmark and elsewhere.

Archer Daniels Midland, meanwhile, has started offering a potential BPA replacement called isosorbide as part of its Evolution Chemicals line. Isosorbide is made from corn and can be used in hard polycarbonate plastics, epoxy resins, detergents, inks, toners and other products. 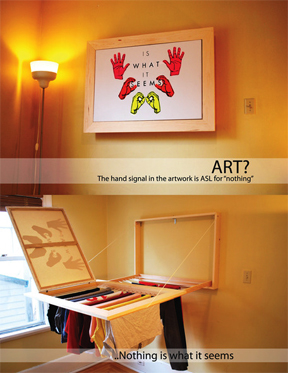 A piece of art that becomes a drying rack won the Levi Strauss' Care to Air design content. The contest sought ideas that could improve on or replace the clothesline and encourage more people to air dry their clothing. Winning $4,500 dollars, the first prize concept, Nothing Is What It Seems (right), consists of framed artwork hanging on a wall that folds out to turn into a drying rack. The second place design, The Evaporation Station, took home $1,500 and presented a similar fold-out idea, but is made up of a vertical metal pole attached to a wall with a number of nesting stainless steel squares attached to it that can swivel out from the wall.

Polymer company PolyOne has received OK Compost certification for two of its lines of plastic colorants and additives. The company's OnColor BIO colorants and OnCap BIO additives were certified by AIB Vincotte as being compostable in industrial composting settings, as laid out by the EN 13432 European standard. The product lines have also been certified to U.S., German and Japanese compostability standards. The company said the drive for compostability certification was driven by demand from manufacturing customers and consumers looking for compostable products.

Nine chemicals that the United Nations has considered banning since late 2008 have been added to the so-called Dirty Dozen list of 12 substances banned by the Stockholm Convention on Persistent Organic Pollutants. Those 12 have almost been entirely eliminated world, and the addition nine include some chemicals that have mostly been banned or no longer manufactured. The newly-banned chemicals include lindane, used as an insecticide in developing countries and a head lice treatment in the U.S.; flame retardants; and PFOS, a former Scotchguard ingredient. The chemicals were chosen due to their links with cancer, developmental disorders and other health problems, along with the fact that they persist in the environment, can end up in far reaches of the world and accumulate in soil, humans and animals. Lindane, though, will still be allowed to use in head lice and scabies treatments, and PFOS will be allowed in flat screens and semiconductors.

Taiwan's Next to Call Bisphenol A Toxic

Bill to Ban BPA From Kids' Food and Drink Items