First was the Cradle to Cradle-certified shipping box, and now comes something different. eBay has just announced a new promotion, the "eBay Box," that is designed to be reused, sent from eBay seller to buyers, and then sent further along, until the end of its useful life.

The Box is made of 100 percent FSC-certified and recycled material, printed with water-based inks, and are designed to require minimal tape and to last for multiple uses. And the intent behind the Box is to encourage sellers to reuse their boxes -- and to encourage buyers to become sellers.

In the process, eBay expects the Box to have significant environmental benefits. According to a post on the eBay Green Team website, "By our calculations, if every box gets reused at least five times, we could protect nearly 4,000 trees, save 2.4 million gallons of water and conserve enough energy to power 49 homes for a year."

Figures represent the savings from the pilot run of 100,000 boxes that will start hitting the road in October. Sellers can place orders for free eBay Boxes until supplies run out, at which point the Boxes will make their ways around the country, connecting sellers with buyers and promoting the idea of reuse.

As shown in the picture below, the inside of each Box contains a space for recipients to include their locations and any other notes; there are also a number of resource-saving and -reusing tips printed inside each Box. (Click on the image below for a larger version.) 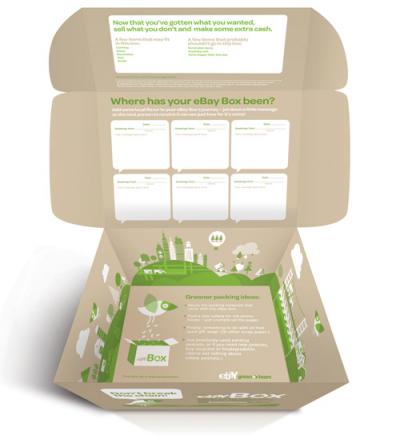 Recipients of the eBay Boxes can log its location on TheBox.eBay.com; eBay's Green Team (profiled by Marc Gunther earlier this year, and discussed in detail by Amy Skoczlas Cole, the head of eBay's Green Team, last month) will track the Boxes' progress and engage with the people who use and reuse them. After a few months on the road, the company will assess how the pilot has performed and figure out where to take it next.

The eBay Box program was one of five winning ideas to emerge from the annual Innovation Expo, eBay held earlier this year. The idea that kickstarted the Box was to create a "simple, green shipping" method, and the result is the latest effort in the Green Team's work to green eBay's operations.

Prior to the unveiling of The Box, eBay worked with MBDC and the U.S. Postal Service to develop a Cradle to Cradle-certified shipping box. Among eBay's other green efforts we've covered include its pioneering adoption of a Bloom Energy fuel cell earlier this year, its brand-new green data center, and its ongoing efforts to encourage shoppers to buy used as a way to recycle goods.

For more information or to request eBay Boxes, visit eBayGreenTeam.com.

The View from the C-Suite: eBay CEO John Donahoe

Is E-Commerce Truly Good for the Planet?