SABMiller Maps the Water Footprint of Beers in Four Countries

SABMiller Maps the Water Footprint of Beers in Four Countries

During World Water Week, currently taking place in Stockholm, Sweden, companies of all stripes are looking closely at their water use. But for industries where water is the life blood of business, water impacts loom even larger.

Throughout the week, water-centric companies have been upping their commitments to reducing their water footprints and taking steps to measure, manage and share their water use data. Coca-Cola, Pepsi and IBM are just some of the companies that have made water-related announcements this week.

SABMiller yesterday published an expansion and extension of its water-footprinting work conducted in partnership with the World Wildlife Foundation. The report, "Water Futures," lays out not just the risks climate change poses to water supplies around the world, but also explores in-depth how much water SABMiller uses for the entire value chain of its breweries in four countries: Peru, Tanzania, Ukraine and South Africa. 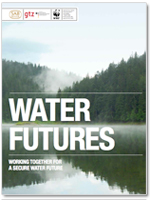 "Faced with climate change, inadequate infrastructure and population growth, business cannot respond to these challenges alone," Andy Wales, SABMiller's global head of sustainable development said in a statement. It is critical that a collaborative approach is taken and in a way which attracts the support of all relevant stakeholders."

The report comes nearly one year after the Water Futures partnership -- the members of which are SABMiller, WWF and GTZ, the Deutsche Gesellschaft für Technische Zusammenarbeit (GTZ), a German agency for technical cooperation -- first published a look at the water supply chains of two of SABMiller's national breweries, in the Czech Republic and South Africa.

In expanding the report, the partnership identified the critical water challenges in each country and how they currently impact SABMiller's operations, as well as how those challenges could increase in the future: For example, both Peru and Ukraine are likely to see heightened water scarcity as a result of climate change.

In all four countries, the vast majority of water used in the value chain -- 90 percent or more -- comes from the growing of crops. SABMiller includes that figure in the overall footprint, even though the company has limited control over that water use. The report also lays out the ratio of water used per liter of beer for each country's brewing operations.

The results of the water footprints for each company are as follow:

The full report, "Water Futures: Working Together for a Secure Future," is available for download from GreenBiz.com.