Americans waste a lot of food -- 27 percent of all food produced wasn't eaten back in 1995, the last time a study was conducted by the USDA. That number has no doubt gone up in the last 15 years, and two researchers at the University of Texas at Austin have published a paper looking at the wasted, embedded energy of all that food.

It turns out that if, by some miracle, Americans stopped wasting food entirely, the country would save 2 percent of its annual energy budget, or about 350 million barrels' worth of oil.

The researchers, Michael Webber and Amanda Cuéllar, of the Center for International Energy and Environmental Policy at the University of Texas at Austin, looked at how much energy it takes to produce, package, prepare, preserve and distribute a year's worth of food in the United States. The figure they arrived at -- 1.4 billion barrels of oil equals between 8 and 16 percent of our annual energy consumption.

The report, which is available for download from the American Chemical Society, breaks down food waste by type (see chart below), and looks at the energy used to produce, process, and transport food. 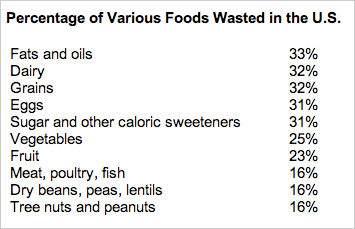 Although this is the first time food waste has been quantified as energy, it's been a focus of companies' efforts for some time -- especially outside the United States. Last month, U.K. grocery retailers announced they had made progress in cutting their food waste, saving 1.2 million metric tons of food waste over the last five years. Sainsbury's, one of the leading U.K. grocers, announced earlier this year that it was investing in new technology to let grocery stores reduce food waste based on real-time supply chain decisions influenced by the weather. And in 2009, Marks & Spencer (another U.K. retailer) set a goal to recycle all its food waste as a way of achieving its zero-waste goal.

In the U.S., Sodexo last month launched an education campaign urging students to reduce their food waste on campus. And the Minnesota State Fair this year experimented with using food leftovers and animal waste to power the fair.

Sainsbury's Aims to Turn All Food Waste into Biofuel