The White House will have solar panels and a solar hot water heater on its roof by the end of next spring, Energy Secretary Steve Chu said in the latest of several recent announcements about installations at sites that include NASA's Kennedy Space Center and the New York Jets' team headquarters.

Chu's announcement yesterday, made with Council of Environmental Quality Chair Nancy Sutley, coincides with the first anniversary of President Obama's Executive Order 13514, which called on the federal government to reduce, measure and report on greenhouse gas emissions.

"As you know, President Obama has a strong commitment to American leadership in solar technologies and the jobs they will create," Chu wrote in a blog that underscored the government's support of solar technology through Recovery Act grants and Department of Energy R&D programs for next-gen solar power systems. "Today, we're taking an important next step. As we move toward a clean energy economy, the White House will lead by example."

The White House solar installations are part of a DOE project to demonstrate the availability and reliability of solar power systems, especially for homes.

Chevron Energy Solutions received approval for its plan to build a 45-megawatt solar installation on 422 acres of unincorporated federal land in San Bernardino County. Some 40.500 solar panels will be used in the Chevron Lucerne Valley Solar Project.

Most of the project's 336 solar panels will sit atop the building in a curved aluminum roofing system that uses next-generation, standing seam aluminum clamps, which eliminates the need for other structural connections and penetrating the roof.

The remaining panels will be used to create a solar canopy for the new facility's parking lot. That system will power six electric vehicle charging stations, a first for the Kennedy Center.

The solar panels for the installation are being made at Sharp's manufacturing plant in Memphis, Tenn.

With 3,000 Yingli Solar panels on the roof of team headquarters and training center in Florham Park, NJ, the New Yorks Jets now have bragging rights to the largest solar power system at any headquarters facility in the  NFL (pictured right). 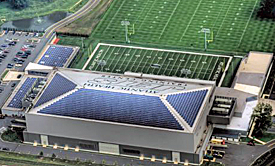 The system is designed to produce 750 megawatt-hours of electricity annually for the facility and is expected to reduce CO2 emissions by 540 metric tons each year. Installation began in June and was completed and generating power about eight weeks later.

Yingli Green Energy Holding Company Limited detailed the project in an announcement last week. Syncarpha Capital owns the system and selected SunDurance Energy LLC to create the turnkey design for the system and construct it. Evolution Energies LLC served as the project developer.

The Jets, which hosts the installation but did not have to pay for its construction, will buy energy generated by the system under a power purchase agreement. Nautilus Solar Energy LLC, a New Jersey firm, is serving as the asset manager for the renewable energy system.

The Largest Rooftop Array in Ohio

Also last week, the Akron Metro Regional Transit Authority unveiled its installation on atop the bus garages at its headquarters. The system is rated at 488 kilowatts DC and is the largest roof-mounted array in Ohio. The installation is expected to produce about 487 megawatt hours of solar power a year.

Third Sun Solar of Ohio installed the system using 2,076 Sharp 235-watt solar modules, the same type used at the Kennedy Space Center. Energy produced by the solar power system is expected to prevent the emission of 350 metric tons of CO2 a year. A state grant of Recovery Act fund helped pay for the $2.5-million project.

Third Sun Solar is installing another 1,477 Sharp panels, which will supply a further 355 kilowatts DC to the Metro site, in a project that is scheduled to begin later this year.

Details about several other solar projects emerged with the start of fall.

In Modesto, PepsiCo's Frito-Lay plant added a 1 MW cylindrical solar photovoltaic system on its roof, now the home of the largest installation in the U.S. by the firm Solyndra (an example of company's product is shown on next page).

The new installation is the second solar project at the facility.

In 2008, the Modesto plant launched a five-acre solar concentrator field made up of 54,000 square feet of concave mirrors.

According to the company, resource efficiency programs at the Frito-Lay plant have led to a 19 percent decrease in electricity use, a 30 percent reduction in natural gas consumption and a drop in water intensity per pound of product by 44 percent since 2000.

In July, the Modesto plant received LEED-Gold certification as an existing building from the U.S. Green Building Council.

Covering about four acres, it is among the larger solar power arrays in use in U.S. agriculture. Castle Rock's system is expected to generate more than 1.7 MWh and offset about 69 percent of Castle Rock's energy needs each year. The system's use also will offset an estimated 28.6 kilotons of CO2 emissions over the next 20 years, according to REC Solar.

Financing was provided by Rabobank, N.A., which has branches in California's agricultural centers from Redding to the Imperial Valley. The bank combined savings from lower utility power bills with federal and state incentives to structure a loan that has the potential of saving Castle Rock more than $100,000 a year after loan payments, according to project partners.

About the same time as the Frito-Lay and Castle Rock announcements, Janssen, a Johnson & Johnson family company, Kohl's and Walmart celebrated completion of key projects in their solar initiatives.

And in August, facilities maintenance distributor Grainger said it had installed a 1.2 MW rooftop solar array at its site in Robbinsville, N.J. The system consists of about 3,900 high-efficiency solar panels and is expected to offset more than 816 metric tonnes of CO2 annually.

SunChips Gathers Energy From its Namesake