Apple has fallen from grace in Greenpeace's latest green electronics guide, while rival manufacturers HP and Samsung have rocketed up the table.

HP, previously lambasted by Greenpeace over backtracking on a commitment to eliminate toxic chemicals from its products, rose from eighth place to fourth in the 16th edition of the guide.

The improvement came after the IT giant launched PVC-free and BFR-free products and promised to phase out beryllium by next July. The firm's score in the league table went up from 4.9 to 5.5, although Greenpeace said the company must now move to phase out BFR and PVC from all its products.

Samsung enjoyed the biggest rise on the scoreboard, leaping from 13th place to fifth thanks to the removal of some penalty points. 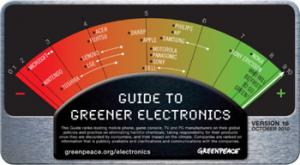 The company had previously been accused of misleading Greenpeace over its inability to meet deadlines for eliminating BFRs from new models of its products by January 2010 and PVC by the end of the year. Even though this black mark has been removed, the fact that it has reneged on these commitments still stands against it.

Apple slipped from fifth place to ninth, although it kept the same score of 4.9 as last year.

The company still performs well on most counts, including lobbying the EU for a ban on PVC, chlorinated flame retardants and BFRs as the EU revises the RoHS Directive.

However, Greenpeace said that Apple needs to clarify its stance on organo-chlorine and bromine compounds. It also warned that Apple needs to work on the transparency of information about its supply chain and the future phasing out of toxic chemicals if it wishes to improve its performance in the rankings.

Nokia retained the top slot on the scoreboard, which it has held since 2008. Sony Ericsson and Philips retain their second and third positions, respectively.

This article originally appeared on BusinessGreen, and is reprinted with permission. The Guide to Greener Electronics is available for download from GreenBiz.com

Dell, HP Call for European Ban on Toxics in Electronics

Philips Springs Ahead, Others Fall Back in Greenpeace Electronics Ranking