Building Information Modeling as the Core of Sustainable Design

Building Information Modeling as the Core of Sustainable Design

Building information modeling can be a valuable tool for architects, engineers and contractors that allows them to explore different design options, see what projects will look like and understand how a structure will perform long before it's built.

BIM, as it's known in the industry, also can help building owners and operators throughout a structure's lifecycle by providing visual context to performance-related data, retrofit plans and other projects intended increase energy efficiency.

BIM is an integrated process for exploring a project's key physical and functional characteristics digitally, said Ani Deodhar, Autodesk's sustainability program manager. For his company, BIM lies at the core of sustainable design for new construction and retrofitting of existing buildings.

Increased costs of energy, ongoing challenges posed by the economy and concerns about sustainability, market demands, occupancy and eventual regulation of carbon output combine to make building owners, operators and managers increasingly aware of how their properties perform -- and compare with others.

Those issues and the availability of state and federal incentives are powerful drivers to improve portfolios. "Not surprisingly, large multinational companies are getting their buildings in order," Deodhar said.

Examples include Walmart, which will retrofit 500 buildings this year, Marriott, whose hotel chain includes 275 hotels that bear the Energy Star label, and Starbucks, which by the close of the year will begin to seek LEED certification for all new company-owned stores around the world.

Globally, buildings account for about 40 percent of energy consumption and more than 200 million buildings are candidates for efficiency improvements, Deodhar said. But optimizing a building's environmental performance requires incorporating interrelated factors, such as location, orientation, internal systems, how the building is used and other variables, into design.

Few companies have the time, bench strength, technical know-how or financial resources to get the job done the old-school way by collecting data first-hand and analyzing it, or by paying for an energy audit of their property portfolio.

"Even if 10,000 dedicated energy auditors worked full-time, 365 days a year throughout the U.S., it would take them over 13 years to do one-day audits of the entire U.S .commercial building portfolio," said Deodhar.

Rapid energy modeling serves as "a bridge between quick -- and often inaccurate -- benchmarks and detailed but costly audits," Deodhar said.

The following chart shows the five basic steps of rapid energy modeling and how the process works, starting by taking photos of a building and adding simple data such as occupany and hours of operation to create a model, obtain analysis and view simulated performance. 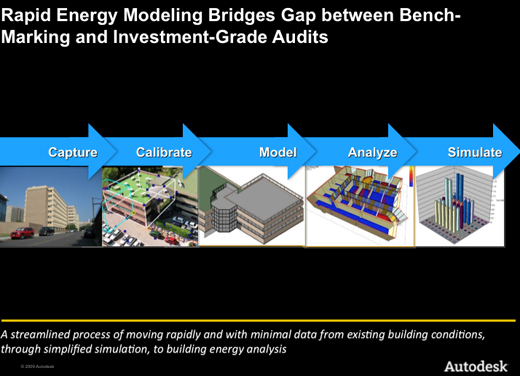 Nils Blomquist, preconstruction manager at DPR, provided a contractor's perspective in the discussion. "A lot more is expected of contractors today," Blomquist said. "They are expected to understand implications of decisions on the lifecycle of a building and its performance."

DPR's two-story, 7-year-old, 52,000-square-foot building in Sacramento, which is LEED-Silver certified, posed a problem. Trees along the perimeter blocked clear angles of the building envelope, so the company used a photo from Google Earth to depict the building's footprint.

The process took about a couple of days for each site, compared to a "a full energy audit that can take weeks of effort and tens of thousands of dollars," Blomquist said.

Mitchell Dec, an associate at Glumac, who is a senior energy analyst and energy department manager, also spoke of time savings.

"Using BIM for energy analysis, we've seen a significant amount of time saved," said Dec. In the case of a project involving more than a million square feet, he said, "if done in the old, traditional way, it would have been weeks." Instead of an effort of a hundred hours or more, it took about a fifth of the time.

The archived webcast about BIM is available at tinyurl.com/AutodeskWebcast.

How BIM and Green Tech Will Change the Construction Industry

Want to Cut Your Building's Energy Costs? Get Out Your Camera