The Cloud is Greener Than Your Data Center

The Cloud is Greener Than Your Data Center

Ever since cloud computing really took off in prominence, there has been a discussion in certain circles as to whether the cloud is actually greener. Some argue that it is by default, since economies of scale and the generally highly virtualized environments that cloud systems run are by nature more efficient.

On the contrary, the case can be made that cloud-centric data centers are like any other data center, with inefficiencies galore. (A recent example of this is a case study by Viridity that found even in a highly virtualized data center, 80 percent of servers were underutilized.) 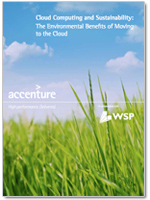 But a new white paper published by Microsoft aims to put the whole discussion to bed: It found that for large companies, shifting to cloud systems can cut energy by 30 percent; for small companies the savings are 90 percent or higher.

While the paper focuses on implementations of three Microsoft applications -- Exchange, SharePoint and Dynamics -- the broader point is valid for essentially any cloud platform.

While companies can address these issues to some extent, the economies of scale under which cloud computing providers operate make it both more cost-effective and more likely that they will make the most efforts to run their operations as efficiently as possible.

The figure below (click for full-sized) lays out the energy savings for each of the three Microsoft applications profiled. For more information, the full white paper is available for download from GreenBiz.com. 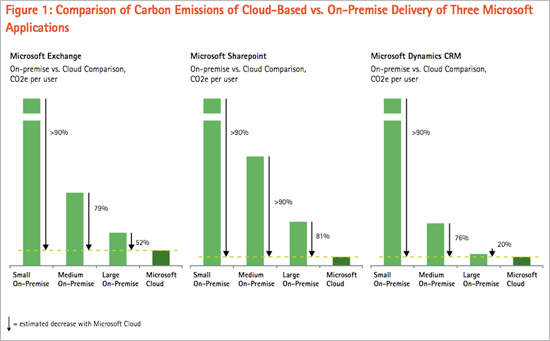 How do you measure the cloud's environmental impact?

4 Reasons Why Cloud Computing is Also a Green Solution

Why An Online MS Office Will Be Good for Green IT

Green IT May Force You to Outsource Your Data Center