Solar-panel maker Solyndra captured headlines last year when it snagged the DOE's first loan guarantee to back innovative technology. The Silicon Valley company used the federal lifeline of $535 million to help build a state-of-the-art factory it calls Fab 2 near an existing plant.

Both the product, Solyndra's proprietary thin-film circular modules, and its manufacture, aided by robots, employ cutting-edge technology. So political leaders and dignitaries flocked to the company in Fremont, Calif., at the prospect of a business that might help the country gain some ground in the global solar race. Governor Arnold Schwarzenegger and Energy Secretary Steven Chu turned shovels of earth during groundbreaking ceremonies in September 2009. President Obama visited this past May. 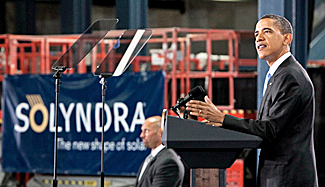 Fab 2 was completed about a month-and-a-half ago, and Solyndra aimed to quickly expand it so that over the lifetime of the new and old plants the facilities would make enough solar panels to prevent the release of more than 350 million metric tons of CO2 emissions -- and add more than 1,000 jobs in the process. But Solyndra is putting the brakes on that plan and made headlines again last week when the news surfaced.

Amid election results, The New York Times reported that Solyndra, which had announced an initial public offering last December but canceled it in June, intends to close its older facility, postpone expansion and restructure its manufacturing operations -- a story that was picked up by other news outlets and in some iterations emerged like a message subjected to a game of telephone. 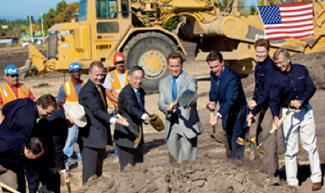 By year's end, Solyndra will close its old plant and centralize manufacturing in the more efficient and cost-effective new facility. Early next year, 20 to 40 employees will be laid off -- the number is in flux because the firm is trying to see whether other positions might be available within the company for jobs that would be lost, according to Miller. In addition, contracts won't be renewed for about 135 temporary employees. Some hiring is planned in order to increase the company's sale force, which is likely to mean the net number of people working for the company will be roughly the same, about 1,000. Expansion has been postponed indefinitely.

Despite the changes, Solyndra is sticking to its plan to increase production next year.

With the consolidation of manufacturing in the new plant, "we still plan to double production next year and this allows us to do this faster," Miller said.

The moves are expected to help Solyndra achieve a positive cash flow by mid-year 2011, he said. The company's revenue was $70 million in 2009 and is expected reach at least $140 million this year, but the business has yet to see a profit.

Demand for Solyndra products has been strong, said Miller, pointing to the firm's recently completed 1-megawatt system for the rooftop of a Frito-Lay plant in Modesto, the company's largest installation so far in the U.S,. and a 3-MW installation that's expected to soon be announced in Europe. The firm -- which intends to pay back the more than half-billion in loans guaranteed by the government, Miller said -- is counting on that demand and the restructuring of manufacturing to pull them through.

"We're delivering on our contracts," said Miller. "This (the changes announced this week) doesn't affect our ability to deliver our products. This allows us to get our costs down -- which is what customers say they'd like to see."

The toughest competition for Solyndra has been manufacturers based in China, whose photovoltaic panels cost less to buy and make and whose products focus on technology that is more established in the market. 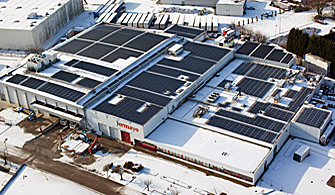 In an article last week about the "Hidden Costs of Solar Power," GreenBiz.com Senior Writer Marc Gunther wrote of the challenges that confront U.S. solar businesses and the fact that the solar industry in this country is buoyed by what amounts to subsidies in a series of different forms.

Interestingly, Gunther, who visited Solyndra's factory, wrote: "While Solyndra is worried about competition from low-cost manufacturers in China, it is still selling all of the photovoltaic panels it manufacturers."

The upshot? The solar industry struggles against several paradoxical circumstances.

While solar power is still an expensive form of electricity, there is a demand for it. As Gunther noted, business is booming -- although for some, profits are hard to come by.

And despite what often seems to be a frenzy of activity in the sector, solar power is the source for just a fraction of the energy in the U.S. It accounted for less than 0.1 percent of electricity in the country last year.

The barrier to broad adoption, according to the Rocky Mountain Institute, is now less a matter of the cost for modules, and more an issue of the balance of system costs -- the upfront expenses for a solar PV system for everything but the modules.

RMI conducted a charrette on the subject this summer that the institute's Kelly Vaughn recently wrote about on GreenBiz.com:

"Getting to good economies of scale where solar PV can compete in the market on its own does not require a technological breakthrough," Vaughn quoted RMI Program Director Stephen Doig as saying. "We actually have all the components and pieces. We just need to drive out the waste in the system, get to scale, and then we will have competitively priced systems. New technologies, or new panels will abet this process, but we don't need to depend on them."

For Solyndra, the challenges of the solar industry are complicated further because balance of system costs haven't been the major issue for the firm. The company's strategy has been to encourage customers to look at the total installed cost of their system and the benefits it delivers, rather than the price of any one component.

For example, the company's modules are lightweight and installation doesn't require holes to be drilled in rooftops. Recent design upgrades enable even easier assembly, and because Solyndra's modules are cylindrical, a cool roof can be placed beneath an array to amp up the benefits for customers, Miller said.

"We can deliver conservation and generation from the same rooftop," he said. So, while the solar array generates power, the cool roof insulates the building, reducing the need for heating and cooling and cutting down on the heat island effect produced by a concentration dark rooftops and surfaces, such as parking lots.

Although Solyndra is scaling back expansion plans -- it now expects to have about 300 megawatts of capacity in 2012 and had previously targeted 612 MW by 2013 -- it intends to remain flexible, according to Miller.

If demand soars beyond Solyndra's projected capacity, "we would certainly add it as necessary," he said.