A Walgreens store in this Chicago suburb has installed a geothermal energy system, becoming the first retail location in any U.S. drugstore chain to tap that source of renewable energy.

Indie Energy, based in Evanston, Ill., designed and installed the system for the new Walgreens on Madison Street in Oak Park that captures heat from the earth with a network of four closed-loop boreholes sunk to a depth of 650 feet.

The heat exchange system for the building is controlled by Indie Energy EnergyLoop technology, which provides a constant temperature of 55 degrees Fahrenheit in the store by using a water-based heat transfer liquid that exchanges heating and cooling energy with the earth. 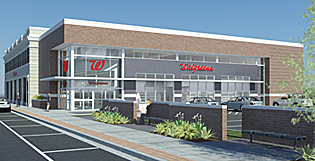 In the store, according to Indie and Walgreens, the geothermal heat pump and refrigeration systems pull heating energy from the fluid as needed, or reject heat via the fluid to enable cooling.

“This is the most innovative and sustainable Walgreens yet and we are proud to showcase our commitment to the environment here in Oak Park,” said Walgreens Vice President of Facilities Development Tom Connolly in a statement yesterday.

Walgreens pursued geothermal for the new store after the Village of Oak Park adopted a measure last year that requires retailers building commercial property in the community to explore using geothermal energy at their sites.

The geothermal system at the Oak Park store is expected to cut energy use at the 12,825 square-foot site by 46 percent.

Other environmentally friendly design elements and systems at the new store include:

With new store, Walgreens goes net-zero for the first time

Walgreens to Harness Power of the Sun