Cisco Holds on Tight to Greenpeace Green IT Rankings

Cisco Holds on Tight to Greenpeace Green IT Rankings

At the COP16 Climate Conference in Cancún today, Greenpeace unveiled its fourth "Cool IT" leaderboard -- a ranking of those tech companies that are best succeeding at applying IT solutions to greenhouse gas emissions, both internally and externally.

Cisco once again held a commanding lead in the rankings, with a score of 72 out of a possible 100. In the previous version of the leaderboard, released in April 2010, Cisco also led the pack with a score of 62.

Several companies made big strides in improving their scores in the past eight months, including the firms that landed in second and third place. Ericsson, in second place again, boosted its score to 57 from 52, and Fujitsu made the biggest leap to land in third place with 52 points, up from just 36 points in April.

"The most forward looking IT companies scored higher because they recognize that they will gain from a low carbon world," Greenpeace energy policy analyst Gary Cook said in a statement. "The sector is happy to talk about its potential to lower carbon emissions by 15 percent by 2020, but thus far, IT companies are still taking an incremental approach instead of providing transformative solutions at the scale and speed for which they are known." 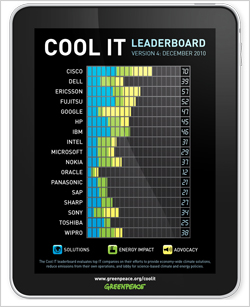 Greenpeace is focused on technology companies because they sit in a privileged position with respect to global action on climate change. Some of these companies, which rank among the world's largest and wealthiest, also among the greenest firms -- the report from Greenpeace also highlights the fact that IT firms dominate the widely discussed Newsweek green rankings as well.

But IT companies can also take advantage of the business world's increasing reliance on technology for everything from data center operations to building and supply chain management to help drive down carbon emissions in every sector.

In order to succeed in the Greenpeace Cool IT leaderboard, companies need to not only reduce their own emissions and advocate for strong climate and clean energy policies.

Greenpeace lauded Cisco for making IT climate solutions an increasingly core part of its business strategy, while at the same time advocating for policies that reduce greenhouse gas emissions.

Examples from Greenpeace of companies supporting or opposing climate action, which can boost or reduce a company's score in the rankings, include:

• Sony Europe joined Google to support the European Union's attempt to establish an ambitious target of 30 percent greenhouse gas emissions reduction by 2020, while Microsoft, Intel, and IBM received a negative advocacy penalty for being part of Business Europe's opposition to this target.

• Fujitsu scores high marks for its presentation of twelve specific climate and clean energy policy recommendations to the Japanese government, which is considering a law to reduce greenhouse gas emission 25 percent below 1990 levels by 2020, while the rest of the Japanese IT companies remained silent (therefore receiving negative advocacy penalties). The IT trade lobby JEITA opposed this draft legislation.

The full rankings are below; more details about the leaderboard are available at Greenpeace.org/CoolIT.

* denotes new companies in the ranking

Greenpeace Takes IT Giants to Task on Climate Action