A partnership between Kaiser Permanente and Recurrent Energy has brought solar power to the heathcare organization's Santa Clara Medical Center, the first hospital among 15 Kaiser sites that will host solar panels.

The installations are the first wave of projects in a renewable energy initiative Kaiser announced last March.

The 15 solar projects are designed to be cost neutral for Kaiser and are made possible through power purchase agreements with Recurrent Energy, which will own and operate the arrays. Kaiser will purchase the power produced by the solar energy systems at rates that are less than or equal to the rates for energy from the grid. 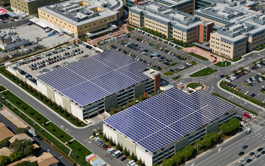 Fifteen megawatts of solar energy are expected to be deployed by the installations with each site producing an average of 10 percent of the electricity used at the host facility. The Santa Clara medical center is expected to get 8.5 percent of its power from the arrays at the site (pictured right).

Although the Santa Clara medical center is the first hospital to benefit from the Kaiser-Recurrent Energy arrangement, it is the second facility in the healthcare organization's portfolio serving as a host site. The first of the 15 installations was completed last year on the roof of a Kaiser receiving and warehouse facility in Livermore.

"The first of many," said John Kouletsis, director of strategy, planning and design for Kaiser's National Facilities Services Department, in an interview yesterday.

The installation at the medical center in Silicon Valley went online on December 9 -- an event that is being celebrated this afternoon at the facility.

The initial renewable energy projects will be located in California and have generated a lot of interest among Kaiser employees, Kouletsis said. At some facilities where solar arrays are anticipated, employees are so excited about the prospect that they've asked for their sites be moved ahead in the lineup for installations, said Kouletsis.

Though pleased by the enthusiasm, Kaiser and its project partner plan to roll through the installations "one at a time instead of four at a time, at least for now," Kouletsis said. "We're proceeding very thoughtfully and carefully." The first installation went smoothly and Kaiser wants to ensure the process continues to function well before installations are done in clusters, he said.

The first phase of Kaiser's renewable energy initiative was almost two years in the planning stage before it was announced. No other not-for-profit healthcare organization approaching Kaiser's size had undertaken such a project, so while Kaiser had the freedom to devise it own path, it also had no model to draw from, Kouletsis said. "It was kind of a blessing and a bane," he said.

Kouletsis credited the top levels of Kaiser leadership for their support and commitment to pursue the initiative, even though research and planning took more time than expected. "What we discovered was that they were 100 percent behind it and that they are committed to this as a public health issue," he said. When the board of directors was told there might be delays, "they said take as much time as you need to do it right," he added.

His top advice to other healthcare groups considering renewable energy projects is "make sure you have that kind of solid leadership support."

Facilities in the first wave of installations include the Vallejo Medical Center in Northern California and medical offices in Lancaster and La Mesa in Southern California. "After the first 15 are done, we'll assess who will be the next 15," Kouletsis said.

Kaiser has a goal supplying 25 percent of its energy needs with on-site generation by 2020. Approaches that will be explored for the next round of projects include geothermal, wind, cogeneration and advanced technology fuel cells, said Kouletsis.

Kaiser's first solar energy system was installed in 2008 on a rooftop of the then-newly constructed medical center in Modesto and was not part of the Recurrent Energy deal. The organization now has three installations with the startup of the Santa Clara arrays.

The renewable energy initiative is part of a broader Kaiser effort to embed sustainability throughout its operation including supply chain, facilities, energy practices, waste management, nutrition and more.