Intematix Shines a Light on New Technology for LEDs

Intematix Shines a Light on New Technology for LEDs

Lighting materials firm Intematix has introduced a product that company leaders say can be a game-changer for the LED industry -- a disk-shaped phosphor component that produces high quality, energy efficient light without the drawbacks associated with conventional LEDs.

Intematix, based in Fremont, Calif., took the wraps off the ChromaLit (pictured left) on Tuesday. Intematix CEO Mark Swoboda calls ChromaLit "an innovation destined to disrupt the lighting industry."

The product springs from Intematix's experience as a phosphor maker. The company is known for its extensive portfolio of the material, which is widely used in the lighting industry to make LEDs and in applications for display devices, such as TVs and LCD monitors. 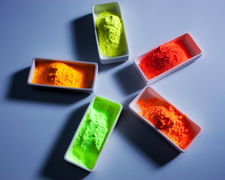 In conventional LEDs, a phosphor compound is used to coat a blue semiconductor chip. Electricity passing through the phosphor-coated chip produces white light. When considering the performance of LED lighting, "most people don't talk about phosphors' contributions to those results," Swoboda told GreenBiz.com in November when the company expanded its phosphor line.

The ChromaLit separates the phosphor from the chip and becomes the light source, as shown in the diagram below: 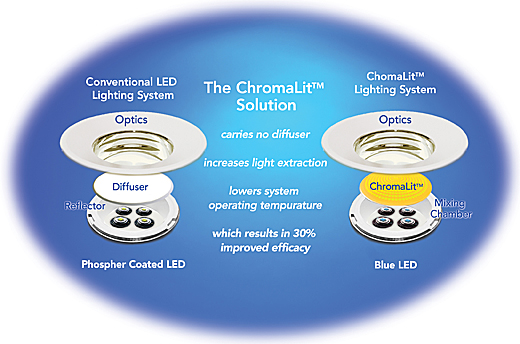 Removing the phosphor from the chips yields several benefits, according to Julian Carey, Intematix's director of product marketing.

The ChromaLit technology provides better light extraction because photons that typically are absorbed or reflected back in traditional LED designs are put to use, he said. The system also is naturally diffusing and operates at lower temperature, which contribute to a 30 percent boost in overall system efficacy. And the technology also helps cut the glare often seen with LEDs and produces a more pleasing light.

In addition to the performance benefits, the technology provides LED luminaire and lighting module makers more freedom in designing their products while enabling those businesses to streamline manufacturing, said Carey and Swoboda. The ChromaLight can be customized to form any shape, and its color temperature, color rendering index and the substrate material can be customized as well. Instead of keeping a supply of chips with different phosphor coatings on hand, LED makers can stock blue chips and "a whole library of ChromaLit light sources" said Carey.

"The lighting and luminaire market is broad," said Swoboda, "and what lighting companies like to do is design. Creativity is very important. [The ChromaLit] gives them another way to deliver solid state lighting products to the market." 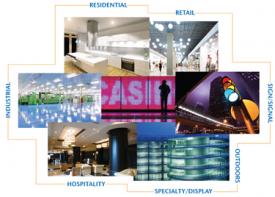 The technology can have a number of applications in commercial, residential, industrial, outdoor and other settings as shown in the company's rendering:

The ChromaLit will be manufactured primarily in Fremont, Swoboda said.