California may have a reputation as the trendsetting state that has given the world a range of technologies, but the next frontier of innovation will likely be in cities, according to its new lieutenant governor.

In a 30-minute interview with GreenBiz.com Executive Editor Joel Makower, Newsom, San Francisco's former mayor, laid out his green agenda for the audience of the 2011 State of Green Business Forum taking place today and Thursday in San Francisco. The event marks the formal kick-off of GreenBiz.com's 2011 State of Green Business report released Tuesday. 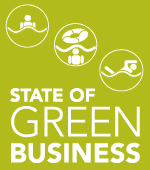 According to Newsom, his new job carries with it some specific duties, such as sitting on the boards of the Ocean Protection Council, University of California Board of Regents, California State Board of Trustees, and chairing the Commission for Economic Development.

But Newsom, who promoted mandatory composting in San Francisco and implemented the city's plastic bag ban, plans to use his bully pulpit to promote cleantech opportunities throughout the state -- an even off our coasts by tapping the ocean for energy.

Newsom's push for wave energy while mayor didn't get as far as he had hoped, but the effort opened up a new idea to pursue wave energy further out, about 4.5 miles off the California coast where it is expected to be cheaper. He hopes there will be a pilot project next year. 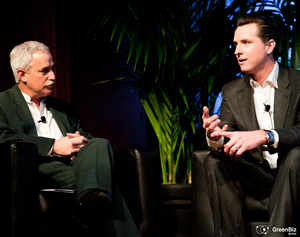 "Oregon is ahead of us on this," he said. "Washington State is slightly ahead. This is stuff that is happening, it is not science fiction."

In an effort to make California a leader in electric cars, Newsom wants to install charging stations throughout California by utilizing the state's network of public rest stops in order to overcome consumer fears about EV driving ranges. He also wants to get the Property Assessed Clean Energy (PACE) program back on track to give homeowners and businesses a financing option for solar panels.

A final push from the lieutenant governor will focus on retrofitting the state's existing buildings, a two-pronged approach to improve energy efficiency and address California's high unemployment rate. Citing 2009 research, Newsom explained that a $1 billion investment in coal would yield 890 jobs, compared to 1,000-1,500 jobs in nuclear, 1,900 jobs in solar, and 3,300 jobs in wind.

He called building retrofits a "game-changer" where a $1 billion investment could produce more than 7,000 jobs in the state.

"That's a great opportunity in California," Newsom said, "to reduce energy costs and dramatically improve the unemployment numbers by making that kind of investment."

A short clip from the video is below; the full video is available online from GreenBiz.com.

A Sneak Peek at the State of Green Business Forum