Heinz and Coke Team up to Squeeze Ketchup into PlantBottles

Heinz and Coke Team up to Squeeze Ketchup into PlantBottles

The Coca-Cola Company today announced a partnership that will license the beverage giant's plant-based packaging to Heinz for use in its ketchup packaging.

The bottle technology, which Coke launched in 2009, uses a plastic sourced from sugarcane waste to replace 30 percent of the plastic in beverage bottles. The company's goal is to eventually achieve 100 percent renewable sources for its packaging, and licensing the technology to Heinz will no doubt help fund the research process.

Heinz plans to introduce PlantBottled ketchup this summer across the United States, switching out about 120 million of its 20-ounce retail and foodservice bottles with the partly renewable packaging. The PlantBottles will have a special label and environmental messages to communicate the benefits of the plant-based packaging to shoppers. 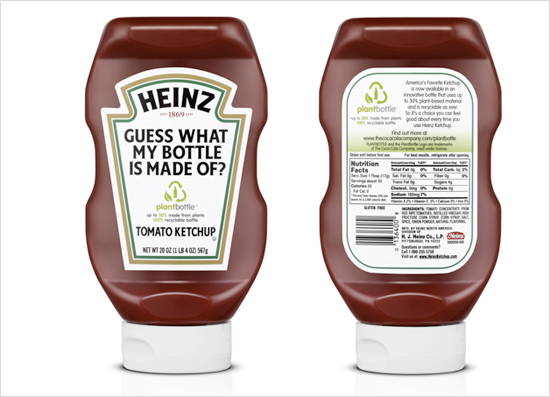 During a press conference this morning at the CAGNY annual conference in Boca Raton, Coca-Cola CEO Muhtar Kent and Heinz CEO William Johnson spelled out the details and the benefits of the partnership.

"This partnership represents a significant landmark," in Coke's journey to achieve its environmental goals, including water neutrality and carbon neutrality, Kent said. Furthermore, it is "the future of the world, we at the Coca-Cola Company believe, lies in the golden triangle of partnerships between business and industry, between business and government, and between civil society."

Coke has already planned to invest more than $150 million in the PlantBottle technology, with a goal of reaching 100 percent renewable and recyclable packaging as soon as the technology allows. Although both CEOs declined to share financial details of the licensing agreement, adding a no-doubt-significant investment from Heinz into PlantBottle technology will also help Coke further its research into renewable packaging.

Kent also said that Coke expects to double its use of PlantBottle packages as the company expands beyond the current nine countries where they sell the products, as well as expand the number of brands that use PlantBottle packaging.

Heinz CEO Johnson said the partnership is a strategic initiative from Heinz as well. "Switching to PlantBotle is another step in our global sustainability initiative to reduce [emissions, waste, energy and water] impacts by 20 percent by 2015." Heinz said the company is on its way to achieve those goals, which were announced two years ago.

Kent cited a study conducted recently at the Imperial College in London that found Coke's use of PlantBottle technology can cut the company's carbon footprint by 12 and 19 percent. And as plastic recycling rates increase, the carbon impacts of the bottles continue to decline. Kent said that PlantBottles used in Denmark are made of 50 percent recycled plastic as well as 30 percent PlantBottle.

Although the PlantBottle technology currently costs slightly more to produce than traditional plastic -- costs that both CEOs repeatedly said were not passed on to shoppers -- investing in renewably sourced and recyclable packaging provides both more future cost stability and helps achieve sustainability goals.

"Over time, depending where the price of nonrenewable fuels go," Johnson said, "this could be a long-term cost savings because of stability. Long-term, we see this as cost benefit."

Coke Picks up Pace on 100% PlantBottle as Cola Wars Continue