Digital media software giant Adobe has received a LEED-Platinum rating for its leased office in Seattle in an ambitious project that earned the three-story, 165,000-square-foot building certification at the U.S. Green Building Council's highest level.

Adobe said this morning that the USGBC had awarded the certification under the organization's Leadership in Energy and Environmental Design standard for an existing building, its operations and maintenance, better known in the industry as LEED-EBOM.

Such projects are often undertaken by building owners or their operators, often in collaboration, as in the case of One Washington Center in Gaithersburg, Maryland, the home of Sodexo's North American headquarters. The building was LEED certified initially under Transwestern's portfolio program and swiftly recertified, but at the platinum level, by owner LaSalle Investment. 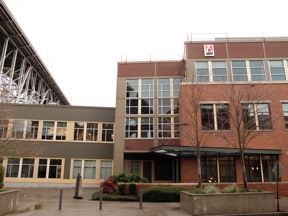 In the case of the Seattle property certification announced today, the tenant, Adobe, drove the LEED project. Spurred by the company's aggressive program to green its facilities (the firm now holds 11 LEED certifications for six buildings, nine of the certifications are platinum ratings and four represent recertifications under the LEED existing building standard), Adobe moved to exercise internal control of property management in the leased space, according to Mike Bangs, the firm's director of worldwide facilities operation, and Mike Gilmore, Adobe's facilities manager in Seattle.

The two-year project that culminated in the platinum certification coincided with a plan to renew the lease on the site and began with extensive examination of resource consumption and installation of systems to enable better measurement and monitoring, Bangs and Gilmore said.

Based on those measurements, the company took a series of steps that have so far resulted in an 18.5 percent reduction in electricity use and an overall 10 percent reduction in water use, with 59 percent of that coming from landscape water conservation, Gilmore said. Increased employee efforts include composting and other waste management activities that have driven the site's landfill diversion rate from 54 percent to 87 percent, he said.

According to the company, improvements at the Seattle facility include:

• The installment of 30 electrical submeters. There were none before.
• Installation of a building management system. Data from the web-based system enables the building to be viewed remotely, as a single property and as part of the company's portfolio.
• Water conservation measures include installation of an ET controller for landscaping and a semi-flushless urinal system.
• Replacement as needed of existing lighting with LEDs.
• Greening office practices and supplies, including replacing restroom paper products with recycled content items.
• In remodeled space, reused former wooden doors as paneling.
• Installed a 540-square-foot fitness room.

In addition, this week the company began offering reusable dishes for dining in addition to the spudware and compostable food containers that had been available.

Pursuing the work wasn't so much a matter of greening a lease, but of exercising lease language that enabled the company to "control our destiny a little more" on costs that would otherwise be passed along to Adobe as a tenant, Bangs said. "To the landlords' credit, they were willing to allow us to do this."

"That's the lesson out of this, if you as a tenant have an opportunity to control the operations of the building (you occupy), you will be able to find opportunities to save," he said.

The flagship for the company's green building efforts is its headquarters in San Jose. The three office towers were certified and recertified at LEED-Platinum level and showcase numerous environmental systems and design elements, including 20 vertical wind turbines and a dozen Bloom box fuel cells, which were installed in the past year.

Photos of Adobe's office in Seattle by John Cornicello, courtesy of the company.

Making a Slice of a Building Green