Its gas mileage of nearly 100 miles per gallon and parts made from recycled materials, including home appliances and plastic bottles, landed the 2011 Nissan Leaf at the top of Kelley Blue Book's Top 10 Green Cars for 2011 list.

The editors from Kelley Blue Book's kbb.com website named the 2011 Chevy Volt (below) to the No. 2 spot in the ranking. The vehicle runs on electricity for the first 35 miles before shifting to a gas engine for 379 miles. As a result, the vehicle achieves a 93 mpg equivalent. 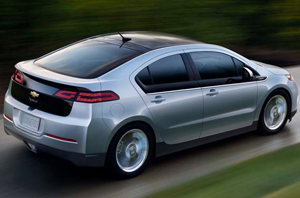 The kbb.com editors didn't just consider fuel efficiency when compiling the Top 10 Green Cars for 2011. Aside from lower CO2 emissions and safety, the car also had to be fun to drive. The editors were able to evaluate a variety of vehicle types, a reflection of the expanded fuel efficient offerings that have recently entered the marketplace.

"The sheer number and types of choices in the Green Cars category have grown remarkably in the last year, with new plug-in electrically driven vehicles alongside an increased number of traditional gasoline-powered cars with improved fuel economy, as well as hybrids and diesels," Jack R. Nerad, executive editorial director and executive market analyst for Kelley Blue Book's kbb.com, said in a statement.

Alongside the rankings -- unveiled ahead of Earth Day -- Kelley Blue Book's Market Intelligence Group released its latest research into consumer sentiment on gas prices and new car purchases. Gas prices have been on the rise in recent months and consumers are taking notice, according to its latest monthly survey, with 35 percent revealing that gas prices have changed their perception of the cars they want to buy, a 5 percent increase from the month before. Respondents said that on average, a car must achieve more 26.2 highway miles per gallon to be considered for their next purchase.