Triscuit began its home farming campaign last year by "seeding" 50 community farms. This year the drive will add another 15 community-based farms to its roster, including five in low-income neighborhoods where access to fresh produce is limited.

"It makes sense to go to places that have the greatest needs," said Jim Low, senior director of marketing for Triscuit at Kraft Foods. The five farms are intended for areas that are located "if not literally in 'food deserts,' in areas where the community does not have the access to fresh produce that they feel they ought to have," Low said. 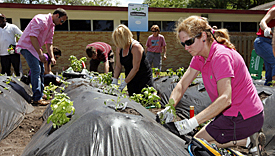 Triscuit and Urban Farming will work with the Housing Authority of the City of Los Angeles and the Chicago Housing Authority to establish the five community farms (three in Chicago and two in L.A.) that are to be located in low-income housing facilities. The neighborhood farms are to be planted and tended by volunteers who live in the area and will share the harvest.

The community garden concept will be applied to the 10 other new urban farms that are to be planted this year in Cincinnati, Detroit, Minneapolis and Tampa. Also, the 50 community-based urban farms that were established last year will be replanted this year. In all, 20 cities will host farm projects. Each farm is about 400 square feet. And while the sites all are in metro areas, their locations are diverse. In addition to the farms planned for the subsidized housing developments, locations include a plot at a community center, church property and university grounds.

The urban farming project is just one component of Triscuit's home farming initiative, which promotes the idea that anyone just about anywhere can grow fresh produce, whether they have limited space such as a windowsill box for planting herbs, their own backyard or share access to a community garden.

The campaign's base is its website, homefarming.com, which has interactive tools for the grow-it-yourself community, including tips, recipes, videos, how-tos for newbies in the garden and pathways for home farmers to connect via the social media and to participate in the program by registering their farms. More than 20,000 had registered their farms as of yesterday. 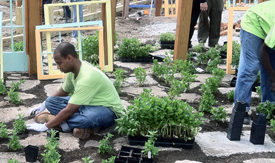 The initiative kicked off its 2011 efforts at a Home Farming Day this week, which featured simultaneous events and groundbreakings in Los Angeles, Tampa and New York City, where a "Plant-a-thon" (pictured above) was held in Madison Square Park.

In other efforts to develop greener communities, representatives for Planters' said the first of four community Peanut Groves has opened. Community work to construct the peanut-shaped park (pictured right and below) on Felicity Street in New Orleans' Central City neighborhood began in February. The park officially opened in late March. Three other Planters Groves are to open this year in Washington, D.C., San Francisco and New York City. 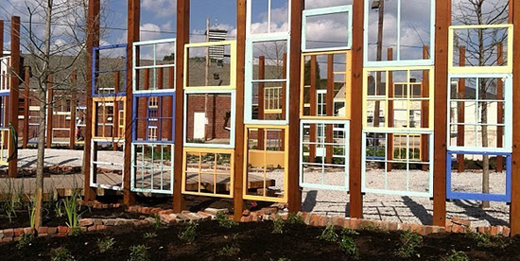 Image Credits: Home Farming photos at top and on Page 1 courtesy of Kraft Foods. Photos on Page 2 of Planters Grove in New Orleans courtesy of Planters.

Can Kraft Learn to Sell Sustainability?