New York's iconic yellow taxis will be replaced with fuel-efficient minivans after the city's mayor awarded Nissan an estimated $1 billion (£607 million) contract to supply a new model that could eventually run on electric power.

Mayor Michael Bloomberg announced yesterday that Nissan's NV200 had won the Taxi of Tomorrow competition, which was aimed at finding a next-generation vehicle specifically created for use in the Big Apple.

The NV200 will be a modified version of the NV200 minivan, already available in global markets including the UK. It will start appearing in New York from 2013, replacing the current fleet of 13,000 cars of various makes and models, which will be retired in the next three to five years.

Provisional estimates show the NV200 run 25 miles per gallon (MPG), compared to the 12 MPG run by Ford Crown Victorias, which currently make up the bulk of New York's taxi fleet. The NV200 is also expected to have an EPA air pollution score of six out of 10, with 10 being cleanest.

However, a spokeswoman for Nissan told BusinessGreen that the carbon dioxide emissions of the NV200 have yet to be determined.

She also said there are no plans to introduce the taxis in London as the NV200 was designed specifically for the New York competition.

The NV200 was the only Taxi of Tomorrow finalist with the potential to convert to full electric power. As part of the contract, Nissan will run a pilot programme that, if successful, will see the city explore the possibility of using more electric-powered taxis. 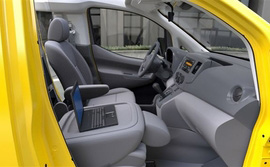 Nissan will also provide up to six all-electric LEAFs to taxi owners and charging stations for testing in 2012. The company is then expected to manufacture a version of the NV200 to run only on electric power from 2017.

Announcing the contract, which will now enter final negotiations, taxi and limousine commissioner David Yassky described the NV200 as the "heir apparent" to the famous 20th century large yellow and black Checker model.

"Never before in the 100-plus year history of the taxi industry has its combined strength been used to drive the design and creation of a purpose-built vehicle, tuned to the streets it will be driving on," he said. "For the first time, we'll have a taxicab that wasn't off the rack, but custom-tailored to create the best fit for the drivers, owners and passengers of our city.

"This is the heir apparent to the Checker, and people are going to fall in love with this taxi once they ride in it. It is going to represent New York City well."

Carlos Tavares, chairman of Nissan Americas, said the company was proud to provide the next generation of taxis for the city.

"The NV200 taxi will give Nissan the opportunity to showcase our dedication to vehicle quality and urban mobility to more than 600,000 passengers a day," he said.

This article originally appeared on BusinessGreen, and is reprinted with permission.