At last week's Uptime Institute Symposium, Schneider Electric unveiled its newest data center innovation: modular power and cooling. Designed as a nearly plug-and-play solution to the rapidly expanding demand for enterprise data center compute power, Schneider says the modules can be designed and installed in a matter of weeks rather than months.

The new products are both the latest expansion of and an attempt to capitalize on the shift in corporate data centers away from unique, custom-built facilities and toward modular and containerized systems.

As more companies need more and larger data centers, simplifying the process of building, developing and then powering and cooling those facilities is a hot-button issue. And Schneider Electric believes the new modules will also be much cheaper to install.

"At the end of the day, if you compare a stick-built [or built-from-scratch] data center versus a modular data center, we think this will be 10 to 20 lower in cost," Kevin Brown, Schneider Electric's Vice President of Data Center Global Offer and Strategy, explained at the Uptime Symposium last week. "And we think that's a pretty conservative analysis." 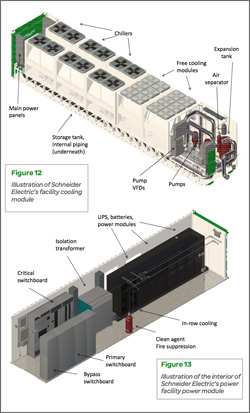 The core of Schneider's new power and cooling architecture is modular, container-like structures that take up the same amount of area as four parking-lot spaces and can scale in increments of 500 kilowatts to match current and future data center demands.

There are two cooling modules and one power module in the company's latest offering. EcoBreeze is a chilled-air cooling module that implements adaptable cooling based on environmental conditions; the system can detect conditions and automatically select either indirect evaporative cooling or air-to-air heat exchange. The company has also created a Chilled Water Cooling Module, which consists of six modular, highly efficient chillers, two economizers and a fully integrated pump house.

The power module in the new solution puts APC -- a division of Schneider Electric -- hardware to work in the UPS, cooling and security and environmental management systems. The power module also includes Square D switchboards -- from another recent Schneider Electric acquisition -- to provide environmental and climate monitoring and management as well as real-time measurements for reporting needs.

Among the benefits of modular power and cooling technologies that Schneider Electric highlights in a new white paper [PDF] include the on-demand nature of modular IT systems: Rather than build a compute facility to meet the expected IT demand for 10-12 years in the future, modular facilities can expand as needed, saving significantly on up-front capital expenditures.

The predictability of performance of modular systems also works in Schneider's favor: Rather than have to learn the intricacies of each custom-built facility, technicians from Schneider Electric's operations teams can go into a modular facility and know almost immediately how to upgrade, expand or repair any element.

Modular systems also can be built to optimize efficiency, something that Schneider Electric has incorporated into its new modular offerings. Dennis Bouley, a senior research analyst at Schneider and the author of the white paper on the containerized solutions, writes:

Cooling system controls within a traditional data center are comparable to a sizeable orchestra where all the “players” have to be highly coordinated to produce quality music. The facility module, on the other hand, can be compared to a simple quartet; the number of components that need controlling are fewer and the integration (the proper adjustment of settings based on cause / effect relationships) is performed ahead of time, so that the container “behaves” in an efficient manner once under operation.

All told, Schneider's modular power and cooling solution marks the next iteration of data centers, a trend that has been years in the making as all the major players -- Microsoft, HP, Cisco and IBM among them -- have developed modular solutions.

At last week's Symposium, George Slessmann, the CEO of i/o, talked about the end of "snowflake" data centers -- unique, custom-designed facilities that are "too expensive and take too long to deliver to meet the demands" of the current revolution in data center demand. And as more companies follow Schneider Electric into the modular market, that evolution will only continue to pick up speed.

AOL, MassMutual, APC and Others Win Uptime's Green IT Awards