Interest in life cycle assessment (LCA) is rapidly growing as more companies realize the benefits of taking deeper looks at their products' impacts, according to a report. Although concerns about the cost and time associated with LCAs remain, a number of factors are expected to make assessments easier and more attractive.

LCA is a method used to look at a wide range of environmental impacts — greenhouse gas emissions, water use, effects on human health and more — from the various life cycle stages associated with products, from raw material extraction to disposal. LCAs vary in scope, with some covering fewer stages than others or analyzing different impacts.

"Every company that is serious about sustainability needs to incorporate life cycle thinking into its approach," said David Schatsky, lead analyst for the Green Research report "Life Cycle Assessment: A Guide for Sustainability and Strategy Executives," and who anticipates that LCAs will be universally adopted within three to five years.

The report, based on surveys and interviews with companies, academics and vendors of LCA tools, says that overcoming some of the barriers to wider adoption is a matter of education and experience.

The main barriers cited by academics that were surveyed include managers being unaware of LCA benefits, the time needed to conduct LCAs and lack of expertise in the marketplace, followed closely by LCA costs and lack of regulations requiring them.

Time and cost, though, come down the more that a company conducts LCAs and as more companies work together to share LCA research through projects and groups like OpenLCA and the Sustainability Consortium.

Experience also matters, as show by companies like Herman Miller. The furniture company took four months to complete its first LCA, but now it takes only a week or less. 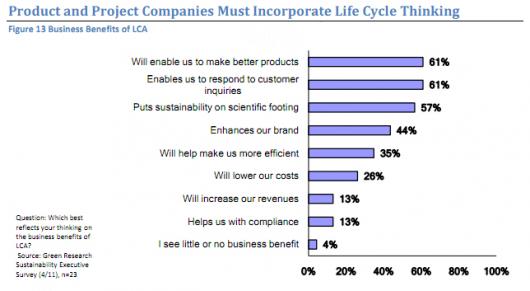 Of 23 companies surveyed that have already conducted LCAs, 82 percent plan to do at least one in the next 12 months. The number of scientific publications that reference LCAs has jumped from 473 in 2008 to 902 in 2010, with 636 referencing LCAs between January and April 2011. And LCA tool vendors and consultants report 30-40 percent sales increases a year, with many companies turning to LCAs to get a better grasp on their impacts, respond to demands for transparency and get ahead of regulations or eco-label requirements.

U.S. law requires biofuels to show, with an LCA, they have 20 percent fewer emissions than gasoline to qualify for the renewable fuel standard program, and France's Grenelle 2 requires high-volume consumer products to have environmental product declarations, which are based on LCA results. In addition, some labels like Green Seal and the EU Ecolabel include LCA requirements.

Another issue around LCAs that is expected to change over time is how companies use LCAs and the information they glean from them.

"It’s worth noting that in our many interviews with corporations who have used LCA, not all could point to specific decisions or business benefits that flowed from an LCA itself," the report says, "In many cases, LCA enabled executives to validate decisions already made, or 'know more' about their products and processes. Until companies internalize life cycle thinking and LCA skills, their early uses of LCA are often retrospective in this way."

Experienced companies will instead use LCAs to make decisions proactively about products and processes, and to avoid unwanted impacts.

The Renaissance of Lifecycle Thinking

Tom Gloria and the life-cycle of LCA