As part of what the U.S. Department of Transportation and Environmental Protection Agency are calling the "most dramatic overhaul" of fuel economy stickers, separate labels will be made for gasoline, hybrid electric and all-electric vehicles.

The new labels will include: 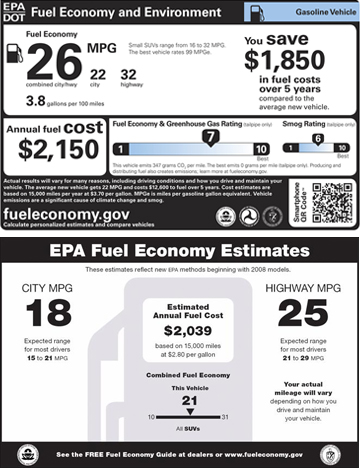 The current labels just show fuel economy, annual fuel cost and general fuel economy ranges. The new ones will be required for all 2013 model year cars and trucks, but car companies can adopt them earlier.

While costs and savings are likely a main consideration for people buying new vehicles, the new labels will also make it is easier for buyers to compare trade-offs like driving range and charging time among gasoline, hybrid and electric vehicles.

Also this week, California-focused research organization Next 10 put out a report that says higher fuel economy standards will increase economic efficiency, create jobs and provide extra savings to businesses and consumers in the state.

Our libertarian Earth Hour-bashing friends over at the Competitive Enterprise Institute, meanwhile, were quick to rip on the new fuel economy labels. In a blog post about the news, Marlo Lewis pointed out that an initial plan to include letter grades on the labels was squashed, and rolled out the idea of the "MPG Illusion" — that people think all fuel economy increases have the same impact, when in fact raising vehicle fuel economy is of most benefit when it's applied in slight increments to highly inefficient vehicles.

...some may conclude, if they can’t afford (or simply don’t want) a Toyota Prius, Chevy Volt, or some other high-mpg vehicle, there’s no point in buying a car with only modestly better fuel economy than their current vehicle.

To the CEI, the government sees the MPG Illusion as the reason why people aren't switching to slightly more efficient vehicles, and the CEI feels that the inclusion of how much gas it takes to drive 100 miles is an attempt to push consumers away from SUVs.

Greenies would love to believe that the market for SUVs is sustained by an “illusion.” Because if that is so, then EPA and NHTSA can depress SUV sales just by making simple changes in how fuel-economy information is presented — just by redesigning the sticker!

The CEI doesn't present an alternative, and it's hard to take seriously arguments that it's a bad thing to give consumers more information to work with, in a standard fashion, when buying vehicles.