PowerNet, the new software product introduced by ENXSuite today, is sort of like social media meets energy management software: Picture a Facebook page where the "friends" are all people involved in an organization's sustainability initiatives.

"PowerNet gives all stakeholders -- whether it's employees, supply chains or other companies -- the ability to manage hundreds to thousands of energy and sustainability projects that require both quantitative and behavioral change metrics, with dashboards to show progress against goals," explained ENXSuite CEO Beatriz Infante.

PowerNet serves as a project repository that gives users the ability to measure the return on investment on a multitude of energy reduction projects, such as boiler upgrades or lighting retrofits (see screen shot below). Infante called it an industry first. 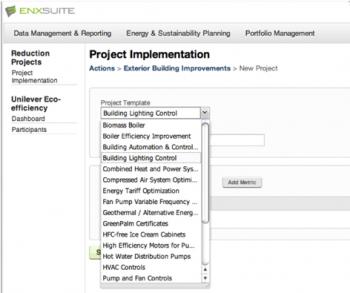 "It is really a breakthrough new product that integrates the best of collaborative web technologies with the best of energy and sustainability project management," she said.

Once known as Carbonetworks -- the company changed its name to reflect a growing emphasis on energy -- ENXSuite is a player on the burgeoning enterprise energy and carbon accounting (EECA) software market. The recent 2011 EECA Software Market Buyers Guide predicted sales of EECA software would increase in 2011 by 300 percent, compared to 2009.

Underlying PowerNet is the company's Software-as-a-Service energy and carbon management platform used by a number of companies and organizations, including the City of Chicago for its Climate Action Plan. The city is the first to test PowerNet, Infante said, while a half-dozen other ENXSuite customers are in the process of rolling it out.

"They were looking for a platform that could reach out to companies in the Chicago area that would participate, have access to information, fill out information, and Chicago could push out information to them," Infante said. "That lets them manage all the strategies, all the action, projects and participants. That in and of itself saves time and money."

For the product, the company is currently targeting heavy energy users, such as manufacturers, but she believes the product could serve even smaller companies focused on reducing energy and managing sustainability projects. Energy, she said, is a universal business concern, independent of company size and sector.

"Energy demand on a global basis is increasing 25 percent of the next 10 years," Infante said. "Supplies are only increasing at 6 percent. Any time you have a supply-constrained equation, prices are going to rise and that is going to create a financial threat and a competitive threat to every company that is doing business that uses energy, which is pretty much every company that is doing business."