• Investing in the Sun. In partnership with SolarCity, Google is investing $280 million to create a fund for financing residential solar projects. The fund is the largest of its kind in the U.S. The commitment, which Google announced today in its blog, is the largest clean energy investment by the company so far, bringing its total investment in the sector to more than $680 million.

• Punching a Ticket for Green Buses. Colorado firm Proterra has corralled a $30 million investment to speed commercialization of its zero-emissions battery-powered electric buses from a group led by Silicon Valley venture capital firm Kleiner Perkins Caufield & Byers that includes GM Ventures and Mitsui & Co. Ltd. GM contributed $6 million to the investment, according to the Wall Street Journal. Proterra's 35-foot, EcoRide BE35 bus (pictured above) is in service in Pomona, Calif., and the company said transit systems in San Antonio and Tallahassee also plan to roll out the buses later this year.

• The Truth About Green Billionaires. Vinod Khosla, Richard Branson, Ted Turner, Bill Gates are among 15 billionaires who are ranked or spanked by Jeff Nield for TreeHugger. Only one gets an "A" and two pull down "D's". 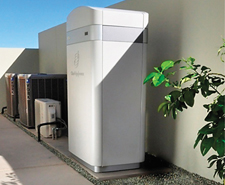 • Testing a NextGen Fuel Cell. Oregon company ClearEdge Power received a $2.8 million shot in the arm from the Department of Energy's Pacific Northwest National Laboratory to test its fuel cells that produce both electric power and heat while saving energy. The fuels cells, which look like a large refrigerator (see photo, right), will be tested at a grocery store, greenhouse, hotel and community college on the West Coast. The units will have a high-speed Internet feed so researchers at the lab can track performance.

• Giant Solar Project in Jersey. McGraw-Hill Companies and NJR Clean Energy Ventures announced plans today to build a 14.1 megawatt solar power system at McGraw-Hill's campus in East Windsor, N.J. The project will be the largest privately-owned, net-metered solar project in the Western Hemisphere, according to McGraw-Hill, and help reduce the company's annual global carbon emissions by about 10 percent.

• Pouring It On. Dow Water & Process Solutions, a unit of Dow Chemical Company, has opened a state-of-the-art Global Water Technology Development Center in Spain, where the company has done business for 50 years. Funded with a $15 million Dow investment and grant subsidies from Spain's Ministry of Science and Innovation, the center is supposed to speed commercialization of the company's clean water technology.

BMW gears up for electric buses with Proterra investment