• Want Fries with That? McDonald’s delivery trucks in the United Arab Emirates are running on 100 percent biodiesel made with recycled vegetable oil from the chain’s more than 80 restaurants in the Emirates.

Dubai-based Neutral Fuels, which has the capacity to produce more than 1 million liters of biodiesel a year, began testing the biofuel last year and started producing it for McDonald’s UAE at the end of May, the two companies announced this past weekend, according to the Associated Press.

• Done Deal: Johnson Controls Inc. has completed its acquisition of Energy Connect Group Inc., a smart grid demand response services and tech firm based in the Silicon Valley town of Campbell, Calif. The acquisition, initially reported as a $32.3 million deal, boosts JCI’s ability to help building operators manage energy consumption and costs by showing them how much energy their properties use and when they use it, and by giving them access to energy markets.

• Stepping Up Solar: Kyocera Corporation has more than doubled the size of the solar power system at its Tanagura manufacturing plant in Fukushima Prefecture, Japan, to meet the government’s requirements for all big energy users to cut electricity consumption by 15 percent following the devastating March 11 earthquake.

The Tanagura plant’s solar power system (pictured below) grew by 194kW to 230kW and has been on line since June 30,  Kyocera said today. According to the company, the system will provide the site with 8.2 percent of the energy it needs, and combined with conservation measures will enable the facility to hit its reduction target. 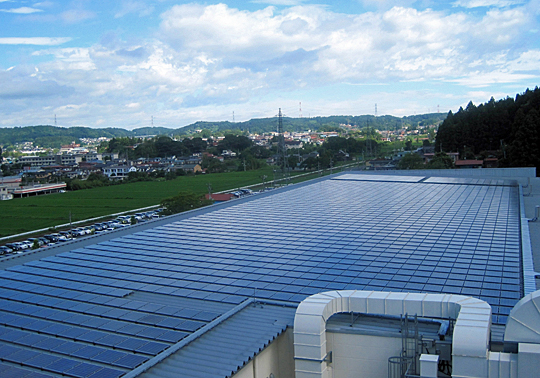 • Wind Farm NIMBY: A couple in Lincolnshire, U.K., say that the din from a nearby wind farm has driven them out of their home. The homeowners want Fenland Windfarms Ltd. and Fenland Green Power Co-operative Ltd. to modify their hours of operation of one turbine and remove two others -- or pay £400,000 (about in $643,880) to cover the couple’s cost of getting another place to live, according to the Daily Mail.

In the landmark case, which opened in the High Court yesterday, Jane and Julian Davis claim they cleared out of the farmhouse they bought in 1993 six months after the eight-turbine windfarm began operating in 2006. Lawyers for the couple are seeking a permanent injunction or damages of as much as £2.5 million (more than $4 million), the BBC reported.

• Boost for Climate Bond Board: The Investor Group on Climate Change of Australia is joining the International Climate Bond Standards Board, which oversees a program to provide investors and governments a way to assess the integrity of environmental claims for green bonds. The Australian organization represents institutional investors and has about $600 billion total funds under management. Other members of the board include the Carbon Disclosure Project and the Natural Resources Defense Council.

In Abu Dhabi, is there prosperity to be found beyond oil?