• Charging Ahead with a Blink: IKEA intends to host charging stations for electric vehicles at 10 West Coast stores under a partnership announced today with ECOtality, the purveyor of Blink charging stations and their support networks. The pilot program, which is expected to run through 2012, has set its sights on placing at least two charging stations at selected IKEA stores in Arizona, California, Oregon and Washington, possibly as early as this fall.

ECOtality is the project manager of The EV Project, whose mission is to install more than 14,000 chargers in the U.S. Jonathan Bardelline wrote GreenBiz.com's latest article on technology that brings together energy, vehicles, information systems and buildings  -- all the elements of the nascent field GreenBiz calls VERGE.

• More EV Education Required: American consumers need more information on hybrid, electric and other fuel-efficient vehicles to make the movement for greener cars take off, according to research commissioned by Johnson Controls. Americans may say they want more efficient vehicles, but they really don't know much about them and are confused by the options, said the company, whose lines of business are power solutions, automotive and building efficiency.

Forty-five percent of about 1,000 people surveyed contend there are too few options among hybrid vehicles, while 39 percent didn't know the difference between various types of fuel-efficient cars, including Start-Stop vehicles, hybrids and EVs. "The findings reinforce the need for greater education about the full spectrum of vehicle technology options, as well as cost considerations both at purchase and over the lifetime of the vehicle," Johnson Controls said.

• Green Energy in a Box: Equipped with solar modules, storage batteries and an inverter in a unit that can be used as its own shipping container, Panasonic's Life Innovation Container, shown right, can supply an average of 6.7 kilowatt hours of electricity in emergency situations and off-grid areas.

Panasonic introduced its green-energy-in-a-box solution at the Indonesian Red Cross Society event called JUMBARA 2011, which concluded last week. Here is a video of the container's debut:

• A Dose of Reality: As resistance to the need for climate change action mounts, (see the post from NRDC's David Doniger as just one example) Al Gore's newly renamed organization -- now called The Climate Reality Project -- plans to provide the world with "24-Hours of Reality." The livestreamed event will be conducted over a 24-hour period from September 14 to 15 with presentations from 24 time zones around the world. More information is available at www.climaterealityproject.org.

• New Kid on the Block: LEED meet SERF, a new green building certification whose acronym stands for the Society of Environmentally Responsible Facilities. Launched last fall, SERF has since certified 32 properties, according to Crain's Detroit Business. Both Crain's piece and blogger Steve Delahoyde note that the market leader in green building certification -- the U.S. Green Building Council and its Leadership in Energy and Environmental Design rating and assessment system -- does not view SERF as a threat but an ally in the green building movement:

"We look at other certification systems and green building-based organizations as collaborators, not competitors," Crain's quoted Jennifer Easton, a communications associate with USGBC, as saying. "We can't do this job alone."

As Rob Watson, known as "the father of LEED" and the executive editor of GreenerBuildings.com, has pointed out: More than a billion square feet is LEED certified. 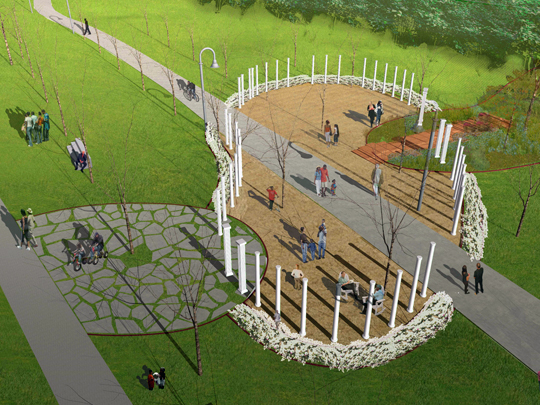 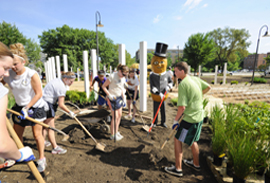 IKEA photo illustration at top and inset photo and video of the Panasonic Life Innovation Container via Business Wire. Rendering and photos of urban garden from Planters.