[Editor's Note: Updated to include Schneider Electric's release of an outdoor version of its EV charger.]

Running out of power is one of the biggest fears for drivers of electric cars, and major industrial companies as well as startups have stepped forward with suites of charging solutions -- from units for commercial stations to devices that can be installed at homes.

General Electric's second entry in the race for EV charger marketshare -- a version of the GE WattStation designed for home use -- is scheduled to hit the shelves of five Lowe's stores in California next month, with a broader rollout to 60 of the chain's retail sites in September.

The wall-mounted device, which will cost about $1,000 plus installation, will also be available for online sales at Lowes.com in September. GE and Lowe's detailed their plans Monday at the Plug-In 2011 Conference and Exposition in Raleigh, N.C.

"We're really excited about today," Chris Bowler, general manager of marketing for GE Energy, Industrial Solutions, told GreenBiz.com. "When you bring a product into the retail world like the WattStation and enable to people to bring it home, have it at home, use it at home -- that really removes a major barrier to EVs."

In a study released last fall, Pike Research projected that sales of plug-in electric vehicles and hybrids would be more than 1 million a year globally by 2015. The study also noted that the owners of the more than 3 million PHEVs and EVs sold by then would be plugging in to charge their vehicles.

According to Pike, that need will drive cumulative investment of more than $5.1 billion by 2015 for electric vehicle IT systems -- chargers, charging stations and the networks that connect them.

A number of companies planted stakes in the EV charging market in anticipation of plug-in EVs' availability in the U.S. market for the 2011 model year. In addition to GE, Eaton, Schneider Electric and Siemens -- all companies with long histories in energy controls and solutions for the built environment -- entered the market and began working with EV infrastructure projects. That moves puts them at the intersection of building, energy, vehicle and information technologies and the networks that connect them -- a dynamic relationship the GreenBiz Group calls VERGE.

For example, Eaton, whose lines of business include energy management systems and hybrid-electric power solutions for delivery trucks and buses, is one of many corporate and municipal partners in the EV Project. The effort, sponsored by the U.S. Department of Energy and overseen by ECOtality North America, aims to install more than 14,000, fast-charge Level 2 (240 volt) devices in the U.S.

Siemens, whose portfolio of chargers includes devices for multilevel charging sites and community use, said Monday that its wall-mounted VersiCharge for residential use (pictured above, right), also a Level 2 (240V) device, will be available for sale by the end of the year. A smart grid version of the product, the VersiCharge SG, will be available in spring 2012, according to the company.

Today, Schneider Electric brought an outdoor version of its EVlink charger to market. Like the company's indoor residential model, which launched in February, the outdoor charger is a Level 2 device that costs under $1,000, not including installation.

The charger, (pictured right) can be used in commercial and residential settings and there's an option that allows two vehicles to power up at the same time.

The wall-mounted model of the WattStation, intended for homes and also designed by Behar, is a Level 2 device that operates on a 208-240VAC circuit and can fully charge a car in four to eight hours depending on the vehicle, the size of its battery and its range. A standard, overnight charging device would take as many as 12 to 14 hours to deliver a full charge.

The residential WattStation chargers, which GE makes in Mebane, N.C., are about 16 inches wide, 24 inches high and can be installed in a garage or outdoors. With a purchase price of around $1,000 and installation that averages $800, according to Bowler, the home unit is competitive with others introduced for the consumer market.

The devices average about $2,000 with installation, according to Consumer Reports. Earlier this year, Gizmag also looked at EV chargers for the home market and found prices ranging from $1,475 for a Chevy Volt Level 2 (240V) Voltec home charging station to $2,200 for a Nissan LEAF Level 2 (240V) device. Tax credits are available for purchase and installation of the devices. 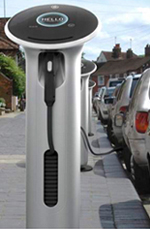 With estimated charging times and prices in roughly the same band for fast-charge offerings, GE's devices have a distinct design feature crafted by Behar: "The unique differentiator is the retractable cord design," said Bowler. The retractable cord makes the charger easier to use and maintain, Behar noted in an interview with GreenBiz last summer.

The EV charger partnership with Lowe's, which will sell and install the devices, builds on a business relationship that began in the 1990s, said Dave Lico, who is GE Energy Services' national account manager for Lowe's. When GE told the company about its charging station plans, "they just jumped right on board last year," Lico said. "We have a good long-term partnership." Lowe's has installed a GE DuraStation charger -- a rectangular, more traditional looking device that was the first charger in the GE portfolio -- at company headquarters in Mooresville, N.C., and plans to install GE WattStations for commercial use at a store in Orlando and a recently opened site in San Francisco.

Last month, GE announced a partnership with Best Buy for accelerated development and test marketing of two consumer energy management products that emerged in the ecomagination innovation challenge. Best Buy also will sell GE's Nucleus Energy Manager, a plug-in device that was introduced in July 2010 and  is expected to reach store shelves in early 2012. Best Buy will be selling and installing the EV charging stations Ford makes for its Focus Electric cars.

GE charges up its WattStation with a fully networked platform

GE's Charge Toward the Smart Grid