Where FedEx is Focusing its Sustainability Efforts

Where FedEx is Focusing its Sustainability Efforts

FedEx this week published its third annual sustainability report, highlighting both the company's achievements on sustainability and where it's going from here.

At the top level, FedEx's CSR report shows steady reductions in emissions from aircraft, overall corporate emissions across all scopes.

It highlights investments in renewable energy, waste reduction and recycling, and green facilities practices like FSC-certified paper use and ISO 14001 environmental management systems.

And over the last year, the company has racked up some notable successes in its sustainability, and efficiency, efforts:

• In October, FedEx opened the doors on a solar-powered hub in Germany, one of five FedEx facilities that together generated 11.2 gigawatt-hours of solar power in the past year.

• This spring, FedEx was one of five companies to sign on to President Obama's National Clean Fleets Partnership, to develop cleaner, greener fleets.

• And in January, FedEx landed two LEED Gold certifications, one for its global headquarters and one for its Las Vegas operations. At the same time FedEx announced that all of its new facilities going forward would be designed to achieve LEED certification. 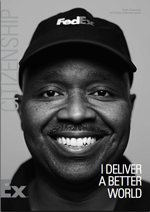 But that's not the story that FedEx is really telling with its report.

"What we wanted to do with this report is show that sustainability is really a team sport," explained Mitch Jackson, FedEx's Vice President of Environmental Affairs and Sustainability. "If you just encapsulate it in [your CSR report], the potential benefit and impact would be less than if you try to get it out in the teams and work groups."

Jackson was talking about FedEx's approach to CSR reporting -- and to some extent its entire approach to sustainability. Unlike more data-intensive reports, FedEx has incorporated standards into the foundation of its efforts, but pushes forward in ways that meet business requirements rather than reporting requirements.

For example: Although Jackson said the report is based on some of the key metrics laid out in the Global Reporting Initiative guidelines, you won't find a GRI grade or a GRI data table in the FedEx CSR report.

"We try not to make the report be the end goal of our sustainability efforts," Jackson said. "We're focused on this broad list of initiatives and trying to make improvement on that, and report on those material issues."

"It's not to discount those things, but you have to focus."

Jackson offered a number of examples of how the company is shifting its sustainability strategy to strategic efforts. A telling example is FedEx's aircraft replacement project.

FedEx is replacing its 727s with 757s, which brings a 47 percent reduction in fuel consumption all by itself. And Jackson said the company is the first to use 777s in their freighter configuration, which brings 18 percent more efficiency to the table.

But there's more: "Here's the beautiful part," Jackson said. "It's more fuel-efficient, and we can fly a longer range, so we don't have to make an intermediary stop. And because of the range improvement, we have a two-hour longer window in Asia. So we're improving efficiency and business performance -- it's the holy grail of sustainability."

FedEx's commitment to LEED is another good example of how its sustainability strategy is reflected in its reporting. Jackson said the decision to shoot for LEED for every new building was based on responsibility and performance metrics rather than for boosting FedEx's green cred.

Although FedEx isn't using a "built-to-LEED" mentality for its green buildings -- it's actually going through the process to achieve certification -- it is taking a "built-to-GRI" kind of approach to its CSR reporting.

"We did use GRI as a foundational bedrock, to go in and look at what elements were out there that we should be capturing data for," Jackson said. But the report itself leans more heavily on case studies and success stories than hard data.

"The jury is still out with respect to assurance and the like for reporting; we continue to look at it," Jackson said. The question for him? "Is assurance really contributing to your sustainability program, or is it a marketing component? We're very focused on data integrity and the information itself, but is there inherent value to seeking outside assurance?"

Although FedEx certainly isn't alone in opting not to get the data in its report verified, companies that do often see it as a means to enhance a report's credibility. The lack of quanitifiable data, however, is considered to be a shortcoming in the CSR reporting world.

But this is FedEx's third CSR report, and even if Jackson didn't say it when I asked him about the evolution of FedEx's reporting, it's almost a rule of thumb that as companies publish more CSR reports, they steadily look deeper, and share more. It just remains to be seen how that process will take shape in FedEx's sustainability reporting, and their sustainability efforts as a whole.

How boxes, bots and biofuels are routing FedEx’s sustainability map