Through Ford's Drive Green for Life program, anyone who buys a Ford Focus Electric or C-Max Energi plug-in hybrid will be able to purchase a special rooftop solar panel system from SunPower designed to provide energy equal to how much is used for charging the vehicle.

Pitched as a way to reduce the total cost of ownership of an all-electric or plug-in vehicle, the 2.5-kilowatt system will produce an average of 3,000 kilowatt-hours of electricity a year, enough to offset how much energy someone would use to regularly recharge their vehicle if they drive around 1,000 miles a month.

Mike Tinskey, director of vehicle electrification and infrastructure for Ford, said the partnership was born out of focus groups and other events held by Ford, where a common thread was people asking about renewables and how solar could be tied to electric vehicles.

"We saw it as a great opportunity to bring two companies together and design and offer a system for those customers," Tinskey explained in an interview.

The partnership is also the latest example of what GreenBiz.com has labeled VERGE, the convergence of buildings, energy, vehicles and infrastructure. Ford has joined a number of companies that are moving beyond their traditional sectors to embrace renewable energy and smart grid technologies.

The panel system will cost under $10,000 after federal tax credits, and the payback period will vary based on home energy use, driving frequency and energy costs. "It's going to be customer-specific," Tinskey said. "The biggest factors are going to be state and local incentives, on top of the federal incentives we've already factored in." The final cost could be around $4,600 in some areas, he said.

Overall, the solar system will cost about $5.50 per kilowatt, a cost about 30 percent below, Tinskey said, the lower end of solar costs in California. 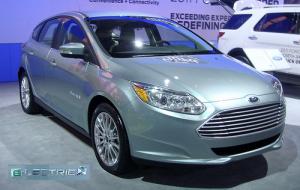 The system is only available as part of the Drive Green for Life program. When car buyers purchase a Focus Electric of C-Max Energi, they'll have the option to sign up for the program, and schedule a time for a SunPower dealer to visit their home and determine if a solar panel system works for them.

The Focus Electric is Ford's first all-electric car, and the C-Max Energi is a plug-in hybrid van-like compact car. Ford's overall electric vehicle strategy include the release of three other vehicles with electric capabilities by 2012 in the U.S. and by 2013 in Europe.

Ford already began production of its Transit Connect Electric small commercial van in late 2010, will release the C-Max Hybrid (a non-plug-in vehicle) next year and has plans for a second hybrid electric vehicle in 2012.

This is Ford's second partnership this year aimed at advancing electric vehicle adoption. In January, the company announced Best Buy would be selling a 240-volt home charging station for the Focus Electric and future vehicles. As with the SunPower partnership, Ford sells the vehicles while the customer goes to the other company to purchase and install the other equipment.

In both cases, Ford is also working with established, nationwide partners. Best Buy has about 1,200 stores, while SunPower, founded in 1985, has around 400 dealers in the U.S., and will be covering all 19 markets the Focus Electric is launching in initially.