Lessons in Green IT from London Schools

Lessons in Green IT from London Schools

Although universities are often criticized as ivory towers, divorced from the real world, when it comes to feeling the impacts of energy-sucking IT and office equipment, colleges are, to borrow a phrase from Us Weekly, "just like us."

Dozens of computers left running all night? Check.
Sprawling data centers in need of serious energy management? They've got 'em.
Ancient, energy-draining printers that see too much action? In every building.

So a new study that shows how higher education institutions around London are putting green IT to work -- as well as what solutions haven't gained traction -- offers plenty of lessons for the private sector as well.

The study was conducted by London Higher, an umbrella group representing 40 universities and colleges, and published as part of an ongoing research project on Green ICT in London HEIs (higher education institutions).

The project's two goals were to assess the state of Green IT at London schools, and then to raise awareness and speed adoption of energy-efficient IT practices in those schools.

At the top level, the study found that the 42 publicly funded schools in London use 170 million kilowatt-hours per year, with total energy costs at £20.4 million (US$33.6 million) and contributing 91 kilotonnes of CO2.

And although estimates put the IT industry's overall global footprint at 2-3 percent of total emissions and energy use, in educational institutions (as with many offices and corporations) technology is responsible for as much as 30 percent of total energy use.

Across just about every school st 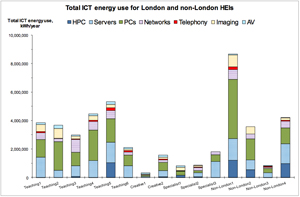 udied by London Higher, the largest share of IT energy use is from PCs -- namely staff workstations and computer labs, where machines are left running all night long. In close second at most schools are the servers in data centers, followed by high-performance computing (aka "supercomputers"). The chart at right shows the breakdown (click on the image for a larger version).

Given those stats, it's not surprising to see the results of a survey of educational IT departments that asked where they were focusing their green IT efforts.

What is interesting to note is that although data center upgrades, printer consolidation and PC power management are the go-to solutions for schools, thin clients, green procurement, and videoconferencing were the least-useful tools for these schools.

London Higher has also pulled together a handful of case studies to illustrate these efforts. One of these, the "IT transformation" undertaken by Metropolitan University, shows the real-world impacts of each of the three most common green IT solutions.

Metropolitan University has set a target of reducing its carbon footprint by 33 percent over five years, and green IT will play a significant role in that process.

The school virtualized its data centers, implemented automatic shut down of unused computers, consolidated printers and took other steps to cut its footprint, with significant results:

The school also put all of its data online, and allows anyone at the university to monitor and track progress as part of a competition to help drive down IT energy use.

More details about London Higher's research, as well as full case studies for three schools, are online at LondonHigher.ac.uk.

Dell to Reap $5.8M in Energy Savings at Facilities Worldwide