If you're in the ethanol industry, look out. Counting on government support for new coal or natural gas technologies? Head for the hills. In fact, if your industry profits from the production or use of fossil fuels at all, it's time to take cover.

A 16-year old coalition made up of progressive environmentalists and conservative small-government advocates today released the latest edition of an annual report that lays out how government cuts to subsidies, tax credits and expenditures can result in major economic and environmental savings. 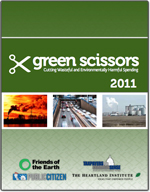 The 2011 Green Scissors report, published by an unlikely aggregation of advocacy groups -- the progressive environmentalist organization Friends of the Earth, the deficit hawks in Taxpayers for Common Sense, consumer watchdog Public Citizen, and conservative free-market think tank The Heartland Institute -- identifies $380 billion in potential savings over the next five years.

The real savings coupled with enormous benefits for the environment make these suggestions smart choices for the congressional super-committee charged with finding as much as $1.5 trillion in deficit reduction, coalition members say. "This spending encourages bad behavior and will save the U.S. money," Ryan Alexander, president of Taxpayers for Common Sense, said during a press conference announcing the report this morning.

The unlikely coalition of partners from the right and left identified more than 20 individual tax credits and direct payments to the oil and gas industry as well as lost revenues from royalty-free leases they say could result in more than $61 billion in savings by 2016.

"Oil companies manage to extract billions from the federal government every year," said Robert Weissman, president of Public Citizen. "They're the most unjustified subsidies in the federal budget."

The report also goes after a few alternative energy resources, including new coal technologies and natural gas. Cutting investment in clean coal, liquefied coal and carbon capture and sequestration could result in more than $3 billion in savings, the group says. They also cite the proposed NAT GAS Act -- which would provide tax breaks and incentives to encourage the use of natural gas – as holding a potential $5 billion price tag, while increasing the use of fossil fuels. But the main alternative energy target is ethanol.

Ending the Ethanol Excise Tax Credit and eliminating the Renewable Fuels Standard could save the country $56 billion by 2015, according to the report. Those funds currently land in the bank accounts of oil companies and biofuel producers, not family farmers, they say. The subsidies also hurt the environment because corn and cellulosic ethanol production require a lot of land and water and result in excess fertilizer runoff and carbon and particulate emissions.

The group expects that the ethanol credit will lapse at the end of the year as planned, although it was extended as part of a last minute tax deal at the end of 2010. An effort this summer to end the credit early led by conservative Republican Senator Tom Coburn resulted in 73 votes. The group says that bi-partisan agreement on that scale in the Senate leads them to believe that the credit will end as scheduled at the end of 2011.

Other industries are also targeted in the Green Scissors report. The group looked to the agriculture sector to find more than $56 billion in savings, including $30 billion over five years from the elimination of crop insurance and flood insurance subsidies. These subsidies "encourage development in environmentally sensitive areas and disaster prone areas," according to Eli Lehrer, vice president of Heartland Institute. Crop insurance alone comes with a $6.5 billion per year price tag for the American public, he said.

The road to getting the report's recommendations enacted will not be an easy one. The effort will require compromise on both sides of the aisle and an understanding that not every elimination of a government subsidy is a tax increase, according to former Republican Representative Robert Inglis.

Many conservative members of Congress understand that, Ryan Alexander of Taxpayers for Common Sense said. "When we talk to conservatives, there's a wide range of opinion of what is tax revenue," he said.

U.S. Wastes $200B in Subsidies that Hurt the Environment

America can afford a Green New Deal — here's how