• Raking in Rebates: In just nine months, California grocers and other retailers -- most of them small businesses -- have reaped $2.8 million in utility rebates thanks to energy audits done by surveyors from Energy Smart Jobs. The green jobs program run by nonprofit PECI is working with 12 utilities to provide the free reviews for power company customers. Changes or upgrades made by the businesses have saved money and energy -- almost 17.3 million annual kilowatt hours of electricity so far.

• More VC Money for Home Energy Management: This fledgling market continues to stir up a lot of attention and cash as concerns about energy efficiency remain high and work steps up to make the grid smarter. EnergyHub scooped up $14.5 million in a series B round of funding this week. The firm says the money will support deployment of its home energy management systems and launch of its Mercury wireless thermostat service.

Marc Gunther's article on VC investments in sustainability talks about how EnergyHub is playing in the mix. Hooking homes and other buildings to the grid are key components of the ultra-connected scenario GreenBiz Group calls VERGE.

• Cool Schools: Sierra magazine's annual short list of the greenest U.S. colleges has a lot of familiar names, though they hold different positions in this year's lineup. Perennial favorite Green Mountain College in Vermont, which was No. 1 last year, is No. 2 this year. Stanford, wedged between four University of California campuses, is No. 5. Here are the Top 10 in descending order:

• UC Davis may move up in the list next year with its new 130-acre green mixed-use community called West Village. The enclave of housing, retail, study and recreation facilities will be wired for smart grid energy management and is designed to draw zero net energy from the grid. Initial occupancy of the development is set to begin in September with a grand opening of its first phase. 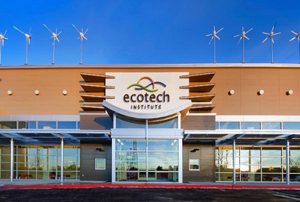 • Making Sausage-Making Greener: Smithfield Foods has so far saved $13.2 million from energy-saving, water efficiency, recycling and waste management projects with a total capital cost of $5 million. The company, whose brands include Armour, Farmland and John Morrell, saved 128 million gallons of water, more than 17.4 million kwhs of electricity and more than 166,000 gallons of diesel fuel. It also recycled almost 3,400 tons of cardboard and diverted more than 2,300 tons of other solid waste. Smithfield honored the efforts in its annual in-house environmental awards program.

The Ecotech Institute in Colorado also earned LEED-Gold certification for practicing what it teaches. The college that focuses on training graduates for jobs in energy efficiency, sustainable design and renewable energy has 12 solar panels, eight small wind turbines, and a system to manage power, natural gas and water use in real time. It also has charging stations for electric cars. The college opened in January and its first class graduates in June 2012.