Dell Backs Away from Carbon Neutrality, Focuses on Efficiency & E-Waste

Dell Backs Away from Carbon Neutrality, Focuses on Efficiency & E-Waste

Dell has a broad focus with its sustainability initiatives -- from energy efficiency to purchasing green power to shipping servers in mushroom-based-packaging to collecting e-waste to reducing toxic chemical use -- and on many of these it's making impressive strides, according to its just-released 2011 CSR report.

The company is touting its energy-efficiency and e-waste achievements as top-line results from the report: 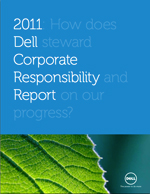 The company's reported energy use holds a few interesting items, as well. It should be noted that Dell's net revenue jumped in FY11 -- up to $61.5 billion, past 2009's levels and well up from a dismal 2010 (when revenues were just $52.9 billion.

And along with that big boost in sales, Dell's emissions also grew: Direct Scope 1 emissions were up nearly 10 percent, to 34,115 metric tons, while its Scope 2 emissions from electricity use were up by nearly 12 percent to 404,791 metric tons -- a number Dell reduces to 334,213 after its green energy purposes.

And Dell seems to be moving away from its pledge to be carbon neutral, a status it achieved in 2008 through the purchase of renewable energy credits (RECs). In a short note on sustainability strategy, Dell's VP of Corporate Responsibility, Trisa Thompson, writes:

Also, we've decided to end our Renewable Energy Credits purchase program for the purpose of achieving carbon neutral operations. We will continue to purchase as much electricity from clean and renewable sources of energy as practical.

Dell has taken some hits for its carbon neutral stance, notably in the Wall Street Journal back in 2008. And the company is far from the only firm to take a second look at what can be questionable claims to carbon neutrality: Yahoo in 2009 backed away from carbon neutrality in favor of efficiency, Nike did much the same in 2010, and PepsiCo made a company-wide shift away from RECs in 2010.

Dell has long been a leader in green power purchasing, although it too has made a shift away from buying green power for the sake of carbon neutrality: In the latest rankings from the EPA Dell dropped from 7th to 35th place, with green power purchases now accounting for 28 percent of its power instead of the 129 percent it was covering in 2010.

Although Dell's energy and emissions impacts are on the rise -- and its green power purchases seemingly on the wane to some extent -- Thompson says that it's to be expected, and is part of the company's shift to data-management services and cloud computing practices, and a big reason for the company's push on energy efficiency in its products and data centers.

But for now, Dell seems to be trying to make the shift to IT services and solutions work from a business standpoint, and will develop sustainability metrics once that transition is in place. The company's environmental goals in its CSR report read simply:

"We are in the process of updating our environmental strategy to reflect Dell’s growth in services and solutions and will release updated environmental targets in the coming months."

And because we're increasingly interesting in tracking the standards used to create CSR reports: Dell has gotten its report certified to GRI level A, although it hasn't gotten third-party assurance for the data.

Greening Your Catalog: Why It's Good for Your Business

Dell spills the sustainability specs on its EMC acquisition