Automakers Debate Visions of the Future of Clean Urban Transport

Automakers Debate Visions of the Future of Clean Urban Transport

How will people get around in the cities of the future? To listen to heads of R&D departments at Toyota and GM, people in perpetually sunny, clean cities will zip around in electric-powered pods that drive and park themselves while accidents and emissions become a thing of the past.

That vision was presented during today's Changing Cities-Changing Cars panel at the Meeting of the Minds conference in Boulder, Colo. Less starry-eyed dreamers on it talked about car sharing, electric buses, lighter vehicles and reducing idling.

The panel's tone was set by its moderator, Bill Reinert, national manager of advanced technology at Toyota. "… A bus with one passenger is one of the most inefficient ways to move people around," he said. "Cars done the right way can be an effective way to move people."

The vision of Chris Borroni-Bird, director of advanced technology vehicle concepts and the EN-V program for GM, meshed nicely with that. Cities and residents have competing needs from transportation, he said. Cities want clean air, to use less energy, to have fewer accidents, less congestion and less parking needs. People want to drive in urban environments because of the comfort and convenience personal transportation offers. (Pictured above is a concept image from GM's rollout of the EN-V last year.)

"There's a reason why people still drive cars in dense cities," he said. "It's a freedom of expression. For some, it's a status symbol."

His team's solution is the EN-V or Electric Networked Vehicle. This highly maneuverable electric pod is networked and provides autonomous driving capability so it can automatically caravan with other EN-Vs and avoid accidents. "It retains the essential benefits of a car without the downsides of car," he said. (The video at right has Borroni-Bird walking through the EN-V concept.)

Autonomous cars would not only be more efficient from an energy perspective -- the 500-pound EN-V has a 3.4-kwh battery compared with the 34-kwh battery in a Nissan Leaf, according to Larry Burns, director of the Roundtable on Sustainability Mobility at Earth Institute (and one of the presenters at GreenBiz.com's VERGE event last June) -- but freeing people from driving could give them an extra hour a day, which he valued at $12,500 a year, or half the price of a car.

"Alternative propulsion and energy technologies get all the attention," Burns said. "Driverless vehicles and the coordination of all that moves us and goods around will be the most sustainable transportation we'll get to experience."

Offering a different kind of solution was Sascha Simon, director of Advanced Product Planning for Mercedes-Benz USA. Two years ago Mercedes started exploring the concept of car sharing because personally owned cars sit unused about 80 percent of the time, he said.

The increased efficiency of shared assets drove the company to launch Car2Go, first in Germany and then in Canada and Austin, Texas -- where there are currently 15,000 members. Soon electric vehicles are planned to roll out when Car2Go launches in San Diego as "the future of urban mobility," according to Austin.

Even more pragmatic was the vision of Michael Austin, vice president of BYD America, which focuses on selling electric selling cars to fleet operators and electric buses to governments.

The buses run 187 miles on a charge and could carry about 40 passengers in the United States for about $8 in energy costs. Compared with using 25 gallons of diesel, e-buses make moving people in cities "very much about public transportation," he said. At a cost of about $650,000, e-buses are twice the cost of a diesel bus but save $500,000 in fuel and maintenance costs over 12 years, according to Austin. 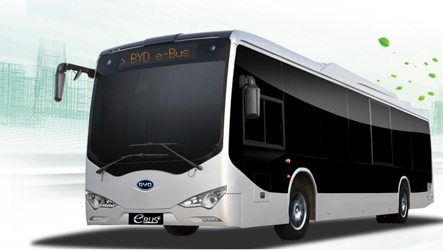 Wrapping up the panel was a late addition to it: John Coleman works on fleet sustainability for Ford. His goal is to make the 5 million cars Ford currently sells each year significantly reduce emissions without requiring new infrastructure.

Ford is aiming to cut between 250 and 750 pounds from the weight of its vehicles and plans to make its new trucks 30 percent lighter, according to Coleman.

The company also looked at idling technology for applications such as utility bucket trucks which idle all day long. By adding a small battery that only runs the bucket, Ford reduced fuel usage by 80 percent and doubled the amount of time workers could be out because of reduced noise concerns.

"It's not as sexy, but with an 80 percent reduction in fuel, now we're making a difference," Coleman said.