Money can grow on trees, and so can jobs -- if those trees are organic. That's the finding of a new report calling for new federal policies to support organic agriculture in next year's Farm Bill and beyond.

Organic agriculture can have a strong positive impact on the U.S. economy and is good for job creation, says a new study by Organic Farming Research Foundation (OFRF). But with additional policy help from the federal government the sector can make the most of its economic and environmental potential is a good investment for the nation as a whole, said OFRF external relations director Denise Ryan. 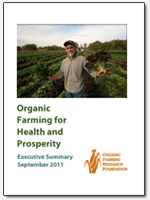 The new report, "Organic Farming for Health and Prosperity," starts by making the point that the organic industry continued to grow through the recession, albeit more slowly than before the recession. After growing at an annual rate of 19 percent between 1997 and 2008, the organic agriculture sector grew by 8 percent in 2010 to $29 billion. Conventional agriculture grew by just 1 percent in 2010, according to OFRF.

This continued growth makes organic farms an economic engine that must be supported by federal policy in order to level the playing field with conventional ag, said Ryan.

"Because of the societal advantages of organic farming, it certainly makes sense that the government would invest in that," she said.

Organic farmers can make all those hires because they are economically viable, says OFRF. Net returns over a standard four-year crop rotation "were significantly higher than returns to conventional systems when a price premium was included," the report's authors wrote. Returns on organic farms were "statistically equal" to conventional farms when those premiums were not included.

If the policy support OFRF is calling for comes to fruition and the number of organic farms increases, the law of supply and demand dictates that the price premium for organics should go away.

"In the current system that exists, it is necessary for organic farmers to have that price premium because we don't have the same infrastructure support that we provide to other forms of agriculture," Ryan said. "Now, if there were investments made in organic farming relative to its growth, probably it would be profitable."

OFRF wants Congress to increase organic research funding from $15 million in the current Farm Bill to $30 million, add $5 million in mandatory funding over the five-year life of the bill for the Organic Data Initiative to bring it in line with reporting for conventional ag, and to provide $30 million over the life of the bill to offset the costs of soil testing for new and small organic farmers.

OFRF is also asking Congress to direct the U.S. Department of Agriculture to make the Organic Production Survey a regular part of the U.S. Census of Agriculture, modify crop insurance programs to eliminate the organic premium surcharge and to research a discount on premiums for organic operations, and basing payouts on prices for organic products, not conventional ones.

Finally, OFRF wants Congress to remove restrictions on purchases of organic produce by people in assistance programs and by government entities; to create an Organic Transition Assistance program; and to reward the environmental benefits specific to organic agriculture operations.

"In this country, it is very challenging to be a farmer, no matter what kind of farmer you are," Ryan said. "We're for funding farming, but we want it to be fair funding for organic farmers."

How Danone, Kashi and Land O'Lakes are backing sustainable farming

From the farm to the restaurant, how people are investing in regenerative agriculture