LEED's Reach Grows Despite Grim Economy, But Slower Than Hoped

LEED's Reach Grows Despite Grim Economy, But Slower Than Hoped

LEED registration soars overseas and continues to edge upward in the United States, but growth seems to be slowing, prompting a concern that progress in green building must accelerate mightily to counter the threats posed by climate change, according to the latest Green Building Market and Impact Report.

GreenBiz.com released the report today by green building expert Rob Watson, a senior contributor to GreenBiz and the founding chairman of the LEED Steering Committee.

The data-rich study by Watson, his fourth annual report in a series that began in 2008, charts the progress of registration and certification under the market-leading green building rating and assessment system, the Leadership in Energy and Environmental Design standards of the U.S. Green Building Council.

Here are some of the key findings in Watson's new report:

Despite the mixed results from this year's research, Watson said during a webcast today that it does show progress and promise for the future of green buildings.

"Green building is becoming statistially significant," Watson said. "In the past, we've had a hard time proving the business case [for LEED certification]."

Designing green buildings and retrofitting existing structures can go along toward combatting climate change. Below is a projection of how greener buildings can reduce greenhouse gas emissions from energy use : 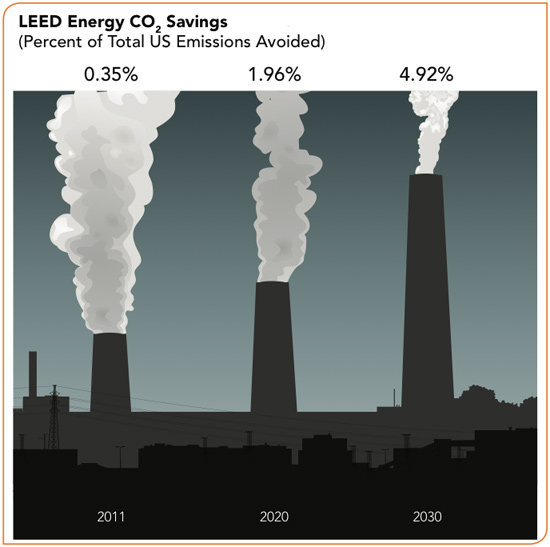 Next page: LEED Buildings' water impacts, plus results of a green building survey

The report tracks LEED buildings' current and future impacts along a wide range of metrics, from CO2 to the amount of construction waste diverted, to reductions in miles traveled for commuters, and many more. 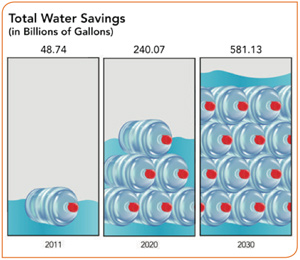 Although the impacts of LEED standards on water use increased over last year's impacts, growth was not as high as hoped, although the savings are significant, as shown in the chart to the right.

Publication of the Green Building Market and Impact Report coincided with the release of results from a survey on the public's perception of sustainable facilities. The Harris survey sponsored by Sealed Air's Diversey business found that:

Diversey detailed the results during the webcast today on "The State and Impacts of Green Buildings." Watson's report can be downloaded for free from GreenBiz.com; and he discusses his report and analysis in the webcast, which took place this morning and will be archived by GreenBiz. Both resources are complimentary with registration.

USGBC Wood Policy Stands (for Now) After Battle Over Eco-Labels