Editor's note: To learn more about city-level innovation, be sure to check out [email protected], coming this fall to San Francisco, November 12-13, 2012.

How can Brazil be a leader for its deployment of renewable energy, boast a strong entrepreneurial culture, yet land near the back of the pack when it comes to innovation in sustainable business and technology?

In a country where a heavy dose of regulation can keep innovation at bay, key drivers to continued advancement in this sphere are public-private partnerships.

That was the conclusion of a group of Brazilian leaders from IBM, GE, World Wildlife Fund, academia and state government that recently converged in São Paulo at GreenBiz Group’s VERGE event to discuss how Brazil can continue to make sustainable advancements through a convergence of technologies including big data, next-generation buildings, cleantech and the smart grid. The event was co-produced with São Paulo-based sustainability firm Report Sustentabilidade.

It’s this integrated use of technology that defines the “smart city” -- a city that, according to IBM Brazil’s Chief Technology Officer Jose Carlos Duarte, “uses information to make insightful decisions” and “leverages its collective intelligence” through analyzing data. Information that’s extracted from the data can predict and better respond to acute events from traffic jams to landslides to floods.

“Real time for a city is too late,” Duarte said at the event. “We need to have information to anticipate…to use technology to predict problems to solve them before they happen.”

Brazil’s second-largest city, Rio de Janeiro, partnered with IBM to engineer a centralized operations hub fed by real-time data  aggregated from over 36 municipal agencies, including its health, water, energy and transportation divisions. The center has 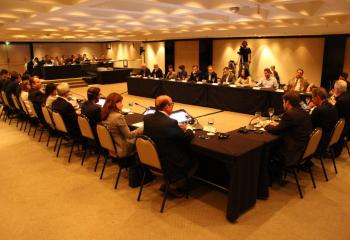 been up and running for almost two years. It was established at the initiative of mayor Eduardo Paes, after about 100 people died from floods triggered by heavy summer rains three years ago, Duarte said.

Having such a system in place will be more useful than ever while Rio preps to host the 2014 World Cup and the 2016 Summer Olympics, major events that will create surges in the local population and require precise top-level coordination to boot.

The IBM model is applicable throughout the rest of Brazil -- as well as across the globe in a world that's experiencing a noticeable shift towards urbanized populations. City dwellers made up eighty-one percent of the country’s population in 2010. Duarte said that IBM can replicate Rio’s operations center in cities worldwide.

“It’s something we can package and sell again … we have to do specific adjusts for specific regions,” he said.

Barcelona and New York City are just two of the more than 3,000 cities that host IBM’s “Smarter City” intelligent operation center projects via the platform it developed for the Rio data center, Duarte said.

Top: Photo of São Paulo at twilight provided by David Davis via Shutterstock

GE is another company that has utilized public-private partnerships as part of an effort to implement “smart systems” aimed at helping local communities, according to Adriana Machado, CEO of the company’s operations in Brazil (GE Brazil).

“The need for collaboration is growing tremendously,” Machado said. Companies need to shift from being focused on its own product and work with companies making complementary products for communities, she pointed out. As a result, they need to find creative business models to make their efforts cost effective for the market, she said.

One example is in GE Brazil’s efforts to generate power from biogas originating from landfill in the city of Belo Horizonte, Machado said, using a GE Jenbacher engine that burns waste. The methane is transformed to energy which is then used to run city operations. Energy can also be sold back to the grid.

The Jenbacher is one of over 140 products and services offered by Ecoimagination, GE’s business strategy designed to mitigate climate change. Ecoimagination partners with technology startups in an effort to drive sustainable innovation and economic growth. In 2011, the company directed $2.3 billion in R&D to products in this area.

“We believe [to spur] innovation you have to take advantage of developments in different sectors,” Machado said.

Event moderator and GreenBiz Group Executive Editor Joel Makower commented that Machado’s remarks highlighted another key component that’s necessary for innovation. “There needs to be policy embedded in systems for new technology to be naturalized in society,” he said.

“We have an energy sector highly controlled by the federal government,” he said.

Its strong grip, in addition to a lack of synergy and coordination among domestic climate, science, technology and innovation policy are also factors, according to Rittl, as is a lack of public investment in R&D and few in-country investors focused specifically on tech innovation, he said.

But developing early stage technology is difficult, she said in response to a question on what the bank can do to help such efforts succeed.

“This year we developed a platform for entrepreneurs in Portuguese,” Murasawa said. Along with technical guidance targeted towards this group, Santander also provides financial products and services for entrepreneurs, she added. 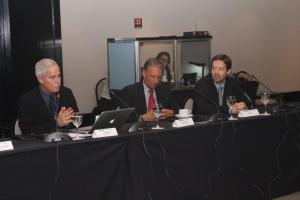 But WWF’s Rittl suggested that more could be behind the challenge to realizing greater innovation in Brazil. A national matrix composed of energy sources that is cleaner than other countries also holds back progress as it creates a “certain conservatism and lack of ambition,” Rittl said.

According to figures by the Brazilian Energy Research Company and Key World Energy Statistics, the country’s portion of its energy coming from renewable resources (over 45 percent) in 2010 was close to four times more than the world average (12.5 percent) just the year before. And at over 55 percent, the state of São Paolo used even more in 2010, according to Milton Flávio Marques Lautenschlager, a state energy official.

“We are in a very comfortable situation,” Rittl concluded.