Next in line for certification: The world's cities

Next in line for certification: The world's cities

There are certifications for green buildings and green neighborhoods under LEED, and a new certification for built landscapes, but until now there's been no way to certify a city's efforts toward sustainability.

The "City Protocol," planned for launch early next year, already has 30 cities and universities across the world signed on. It will be managed by a newly formed organization, the City Protocol Society.

Its purpose is to form a trusted network of cities that can help each other move forward using "curated guidance so they do not have to navigate this journey alone," says the website. The community will be able to leverage the knowledge gained from city transformations worldwide.

Partner Cisco Systems' Smart+Connected Communities platform will form the basis for collaboration, and from it cities can develop common approaches and solutions to quickly advance sustainability agendas.

Here's an example of the indicators of a Smart City, developed by Boyd Cohen, LEED AP and climate strategist: 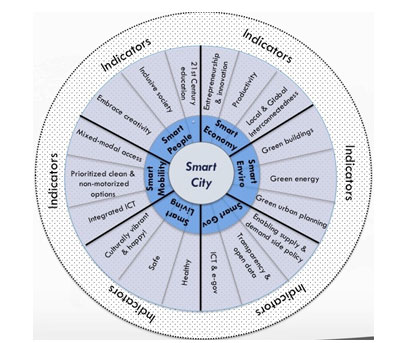 Image of a smart city provided by Georgejmclittle via Shutterstock.

"City Protocol is a new, distinctive and substantial program that will enable better understanding and collaboration among the different stakeholders (cities, academia, institutions, companies and society) that are involved in the development of more sustainable, efficient, cohesive and innovative smart cities. It will deliver benefits both within and between cities, by addressing cities in an integrated, systematic way," said the founders.

"It will be developed on an open, transparent, principled and collaborative basis," they said, "to deliver truly shared, trusted and universally useful outcomes. Using a process modeled on the way the Internet Protocol is managed to enable its continual evolution and development, the results will be thought out, debated and developed openly and internationally, using the best thinking and expertise within the City Protocol community."

Many of the 33 cities that have signed on already have far-reaching sustainability programs in place, such as Barcelona, New York, Paris, Rome, San Francisco, Seoul and Taipei.

Fourteen universities and 20 other organizations such as GDF Suez, Accenture and Cap Gemini are involved. The protocol is  supported by technology heavyweights Cisco, Fujitsu, Hewlett-Packard, IBM, Microsoft, Oracle, SAP, Schneider and Siemens.

One of the first tasks will be to create a "City Anatomy" -- standards that provide a common language for all the systems that work together in creating a sustainable urban community.

A discussion on smart cities takes place on Twitter (#smartchat) on the first Wednesday of each month.

This story originally appeared on Sustainable Business and is reprinted with permission.