Editor's note: This is the fourth piece in a four-part series by Patricia Jurewicz of the Responsible Sourcing Network about how business can address the issue of conflict minerals in their supply chains. Part I examined how companies are affected by the SEC conflict mineral rule. Part II identified resources for conflict mineral reporting. Part III discussed the partnerships between industry and government to establish conflict-free markets.

Little has changed in the eastern part of the Democratic Republic of the Congo (DRC or Congo) over the past four years. Turmoil in the country has claimed the lives of over five million Congolese and has led to the rape of hundreds of thousands of women.

The violent rebel groups propagating this conflict are largely financed by the mining of precious minerals, according to United Nations reports. So it’s not a surprise that Conflict Mineral Section 1502 was included in the Dodd-Frank Act.

Companies who are taking the lead in setting up conflict-free certification schemes and closed-pipe sources of certified tin, tantalum, tungsten and gold (the “conflict minerals”) should be applauded.

But according to a new white paper by the Responsible Sourcing Network (RSN), not enough are taking action.

Today, RSN is releasing What’s Needed: An Overview of Multi-Stakeholder and Industry Activities to Achieve Conflict-Free Minerals. The white paper draws upon its research of industries that use conflict minerals in their products. With the exception of a few specific companies and industry associations, the aerospace, defense, medical device, jewelry, tooling, retail, apparel, footwear and toy industries have done next to nothing. The automotive, smelter/refiner, and mining industries have made selected efforts, while the electronics industry has been the most proactive in this area. 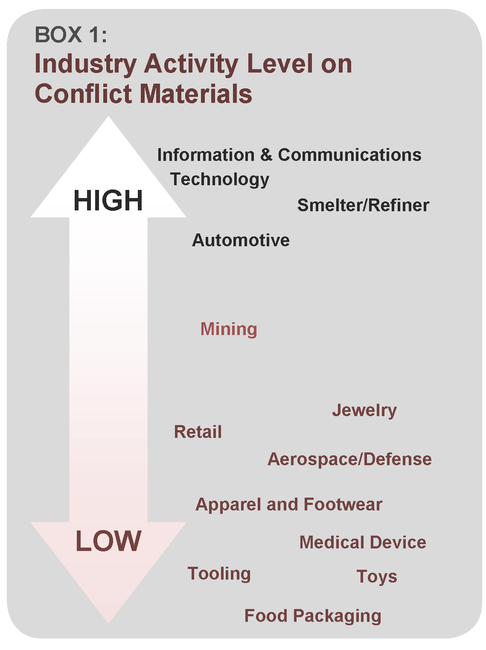 It’s time for individual companies to bring their industries together to implement transparent accountability systems that can make a profound difference on the ground in the Congo. In the last four years new disclosure legislation, traceability structures and certification schemes have been developed. However, companies new to the issue have found it difficult to implement change while navigating through this landscape. What’s Needed describes over 20 current initiatives and lists participating companies in each one (see diagram below). 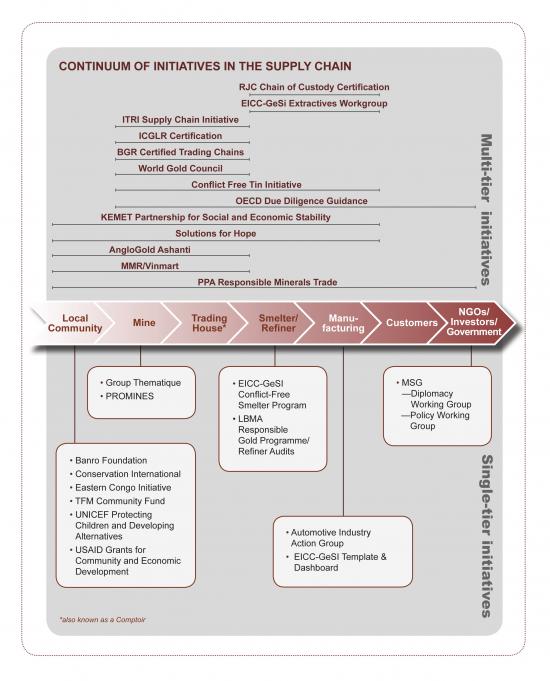 Beyond a responsible supply chain

Having a responsible supply chain by itself is not enough.

Disclosing information to the SEC and verifying and purchasing conflict-free minerals alone will not end the conflict. To ensure a stable supply of conflict-free minerals, a peaceful environment, and controlled borders are needed. Companies must take a holistic approach that includes effective diplomatic action and contributions to sustainable economic development.

Although it is the role of governments to create peaceful and stable environments for their citizens, the private sector can encourage governments in fulfilling their obligations. Companies should join human rights advocates in asking the U.S. and European governments to push for security sector reform in the DRC as well as peace negotiations between the DRC and Rwanda, Uganda and other neighboring countries.

Companies can strengthen their social license to operate by providing communities with schools, clinics, clean water and roads. If companies take this one step further and contribute to capacity building to diversify and expand small business development, economically independent communities could flourish. Providing economic alternatives to dangerous and illegal mining or joining a militia is imperative to creating a conflict-free Congo.

Companies should at all costs avoid a de facto ban on DRC minerals since hundreds of thousands of people depend upon mining for their livelihood and conflict-free minerals are starting to become available. It is the responsibility of governments, investors and corporate communities to stand up for Congolese people and condone sourcing materials that are conflict-free but not Congo-free.

My search for green tin in the Congo