When IKEA was building its store in Centennial, Colo., it wanted to add solar panels. Without any idea of how much energy the building would use, it went with a conservative installation.

Two years later, those 2,212 panels have proven effective at keeping energy costs down with room to spare, so IKEA is doubling the size of the rooftop solar installation.

"It was a very simple decision," said Joseph Roth, an IKEA spokesperson, "It's working well, and we have room to do more."

The 2,492 additional panels will take up the remaining space available on about one-third of the roof, and represent the next phase of the retailer's energy efforts since it finished adding solar panels to all U.S. locations that can house them. IKEA stores are bigger than other big-box brands, at an average 300,000 square feet.

The world's biggest furniture seller completed its first U.S. solar project in October 2010 at its Tempe, Ariz., store. Since then, it has followed a path to install solar at as many locations as possible, as part of its goals to reduce its carbon footprint and energy costs.

"We evaluated locations that seemed more intuitive than others," Roth said. Other early installations started off in California, then moved to East Coast stores, the Southwest and the Midwest. 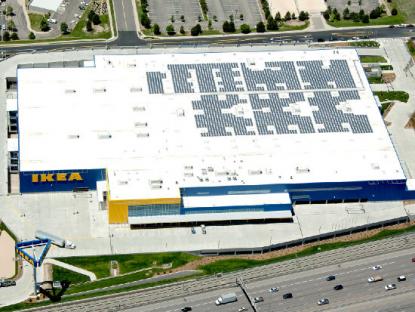 With the completion last month of a solar project at the Charlotte, N.C., IKEA store, the company now has solar on 39 of its 44 U.S. facilities, totaling up to close to 38 megawatts of generation.

The remaining five sites, Roth said, aren't viable for solar due to building constraints such as too little free space on roofs.

"Sometimes the process can take longer than we want," he said. "Once we got a bunch of these under our belt, we started to take for granted how long it will take."

The solar push goes hand-in-hand with a goal IKEA set out in October to be energy independent by 2020, meaning it produces as much renewable energy as is consumed by all IKEA Group stores and buildings worldwide. The company so far has installed some 250,000 solar panels on its buildings. It also owns and operates about 110 wind turbines in Europe, and has committed to spend $1.8 billion on renewable energy through 2015.

"Even before that, we were very focused on energy conservation and energy generation," Roth said. "One was a general commitment to sustainability and the other became a much more tangible goal."

Solar power is a major point in sustainability projects for retailers that have large buildings with plenty of unused roof space.

Walmart is the clear leader in this area, partly because of its size and number of facilities, but also due to the money and commitment it put behind solar and other renewables. 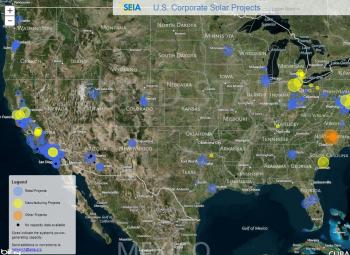 Walmart has its own goal to run 100 percent on renewable energy, and in April announced plans to produce or procure 7 billion kWh of renewable energy a year globally by 2020, a sixfold increase over the amount of renewables it used in 2010.

The retail giant already has about 200 solar energy projects in operation or being developed on Walmart stores, Sam’s Club stores and distribution centers in the United States, and it plans to install solar power on 1,000 or more facilities by 2020.

Compared to IKEA's generation capacity, Walmart has 88 MW of solar power installed, although Walmart says that its installations cover only 5 to 20 percent of a given location’s energy needs. The amount per store aside, Walmart says it has saved about $2 million thanks to its solar projects so far.

IKEA owns and operates all of the solar panel installations, as opposed to other options such as leasing them from a separate owner.

"We're very much about controlling our own destiny," Roth said, noting that IKEA buys all the land it operates on and builds all of its facilities. "We didn't see why we should have to pay money while someone else makes money while generating power on our roofs." 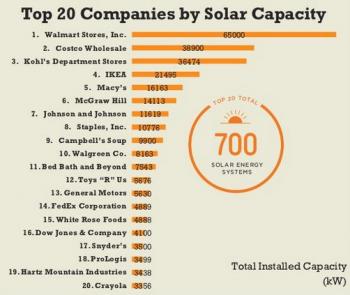 As it stands, IKEA’s stores are using all of the energy their installations generate, but none is 100 percent powered by the sun.

Roth said that the amount of energy being provided by the installations varies from more than to 25 percent to under 85 percent, depending on the installation size, store size, angle of the sun and other variables.

With most of its U.S. locations fitted out with solar panels, IKEA has its eye on geothermal energy next.

The 413,000 square-foot Centennial store is the first and only IKEA location in the country to run partly on geothermal energy for heating and cooling. That, combined with its existing solar panels, has allowed it to operate without any gas hookups from an outside utility. Once the solar expansion comes online, the store will be the furthest along in being energy independent. Installation of a 1.1-megawatt system is expected to begin next month.

IKEA already operates close to 50 geothermal projects around the world, Roth said, and hopes to expand that presence in the United States.