The U.K.'s largest living wall was unveiled Wednesday in London, not only brightening up the streets of Victoria but also helping to reduce urban flooding.

The 350-square-meter installation on the side of the Rubens at the Palace Hotel contains more than 20 plant species, including buttercups, crocuses, strawberries, spring bulbs and winter geraniums to ensure it flowers year round.

Victoria's large expanse of hard surface leaves the area vulnerable to flooding, a problem that affects many urban districts. The Environment Agency estimates around 534,000 properties in London are on the Thames floodplain, and one in four in London are at risk of flooding.

The wall helps reduce run-off by capturing rainwater from the roof of the hotel in dedicated storage tanks. Up to 10,000 liters can be stored at one time, before being channeled slowly through the wall to nourish the plants.

It is also expected to improve air quality in the area by trapping toxic particulates emitted in exhaust fumes, as well as dampening noise, boosting the numbers of birds and bees and helping to keep the hotel cooler in the summer and warmer in winter. 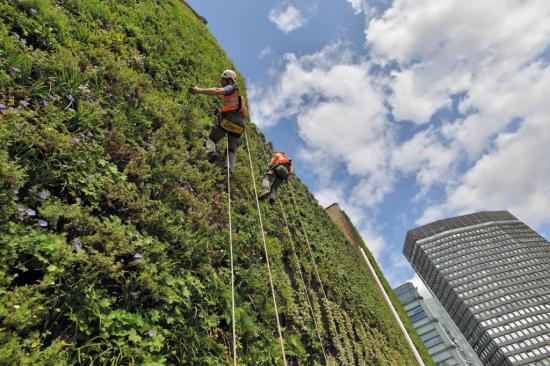 The opportunity to install the wall at the hotel was identified by a mapping project launched to find new locations for green space in the area conducted by the Victoria Business Improvement District (Victoria BID), representing more than 250 local businesses.

The wall itself was designed by the Green Roof Consultancy and was supported by the Mayor of London's office.

“London's abundance of trees, parks, gardens and increasing numbers of living roofs and walls not only makes the city a more attractive place to live and work,” he said in a statement, “but also boosts the local economy, improves air quality and can increase resilience to extreme weather.

“So the mayor is encouraging even more green initiatives, just like this fantastic living wall in Victoria, to make sure London can continue to compete, not only as the greenest city in Europe, but as the best big city on earth.”

Editor's note: To learn more about urban resilience and the convergence of sustainability and technology, be sure to check out VERGE SF October 14-17.

This article is reprinted with permission from BusinessGreen.
Topics: